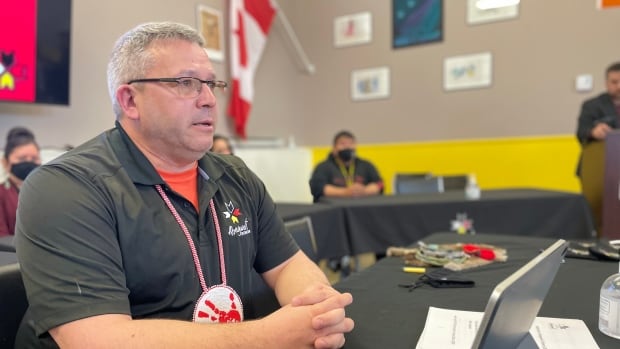 The Abegweit First Nation says it will not be launching a lobster fishery under a treaty this year.

The community held a news conference on Friday saying it was still negotiating with the Department of Fisheries and Oceans (DFO) for a fishing deal, saying it would not follow the Lennox Island First Nation’s decision. to launch such a fishery without the support of the federal government.

Once he finalizes a deal, Abegweit said he will launch his self-regulated moderate subsistence fishery when the community deems it is the right time.

“What is happening on Lennox Island and setting up their moderate livelihoods is very much within their right to do, and I applaud the community for that,” Chief Abegweit Junior Gould said Friday. “My brothers and sisters are exercising their rights, and I think that’s a good thing for First Nations people across the country.

Gould wants to ensure that all commercial fishers on the island realize that Lennox Island and Abegweit are separate communities, and Abegweit conducts its own negotiations with DFO independently.

Abegweit First Nation engages in commercial fishing using band-owned communal licenses, and the chief said he is proud of the relationships his community has established with nearby non-native fishers.

Tensions have periodically increased between Indigenous and non-Indigenous lobster fishers in Atlantic Canada as the legal landscape has changed.

In the fall of 2020, the Sipekne’katik First Nation in Nova Scotia initiated a moderate subsistence fishery without an agreement with DFO. Non-Indigenous commercial fishers resisted the fishery, leading to violence and a fire that razed a Mi’kmaq lobster fishing facility.

“For years, the Abegweit First Nation has fished very well alongside them,” Gould said of Prince Edward Island’s non-Indigenous commercial fishers, adding, “We are 100% owned and operated. by First Nations. We are proud of it.

We want to work with everyone for the benefit of our community because our community can benefit neighbors.– Chief Junior Gould, Abegweit First Nation

“I don’t see a lot of rhetoric from the fishermen. I see a lot of frustration with the federal government’s inability to come to an agreement.”

Gould said Abegweit received an offer from DFO two weeks ago during moderate livelihood fishing talks, but was not happy with it.

“They only brought trinkets and beads to the table,” the chef, who is also a fisherman, said at the press conference.

“It’s not a good faith negotiation…I have the numbers, I have the knowledge, I’ve fished all my life.”

In a response to CBC News, DFO officials said the department was actively working with First Nations in the Maritime provinces and the Gaspé region of Quebec to further implement their treaty right to fish, while maintaining “healthy fisheries for all anglers for generations to come”. “

“The Government of Canada is committed to advancing reconciliation,” the statement read.

“DFO has had discussions with the Abegweit First Nation over the past several months. We cannot disclose the details of these discussions at this time.

On Thursday, Lennox Island Chief Darlene Bernard said the community intended to launch a treaty fishery on May 7 without Ottawa’s approval.

This right of Indigenous peoples to fish for a living was upheld by the Supreme Court of Canada in the 1999 Marshall decision.

However, Canada’s highest court clarified that same year that the federal government could still regulate Mi’kmaq fishers if there were concerns about the conservation and overall health of a particular fish stock.

The tribunal said DFO should consult with Indigenous groups.

Bernard told CBC News that if there was any violence aimed at the lobster boats or Lennox Island treaty crews, the gang would hold DFO responsible.

Lennox Island will conduct its treaty fishery from its own wharf on the north shore of Prince Edward Island, which Abegweit does not have. It’s one of the factors that Gould says went into his community’s decision to suspend a treaty fishery.

I think that in all truth and friendship, these negotiations should be done with everyone.– Junior Chef Gould

“We need to enter a nearby community…and engage in a good faith community exercise to access that port,” the Abegweit chief said.

“I believe that with truth and friendship, these negotiations should be conducted with everyone.”

Gould took issue with a statement released Thursday by the PEI Fishermen’s Association, which he said unfairly implied that all First Nations came from the same place when it came to fishing.

He said the PEI Fishermen’s Association should be included in the Aboriginal fisheries negotiation process, but as a stakeholder and not as a decision maker.

“I’m asking them to engage with transparency and inclusion in the process. And that’s the difference we’re making here. We want to work with everyone for the benefit of our community because our community can benefit neighbors “, did he declare.

“What I asked for, for my community, is quite reasonable.”