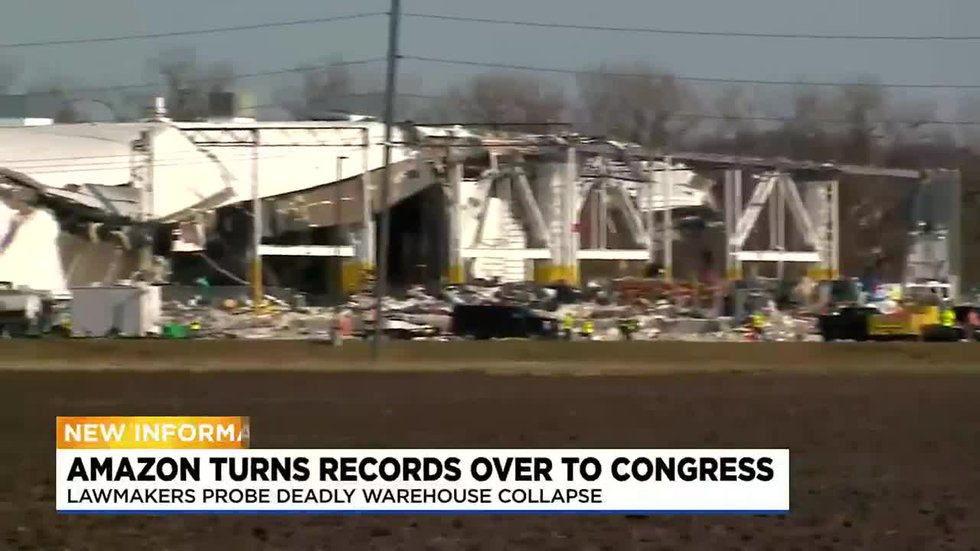 EDWARDSVILLE, Ill. (KMOV) – Amazon says it has turned over more filings to Congress after it was accused of obstructing a congressional investigation into the Edwardsville warehouse tornado.

Six people died when the warehouse collapsed during an EF-3 storm on December 10, 2021.

In March, the House Committee on Oversight and Reform launched an investigation into Amazon’s actions surrounding the storm. The committee gave Amazon a list of hardware to turn in by mid-April. Members of Congress claimed that Amazon had not turned over all the requested material and gave the company until June 8 to comply.

Amazon tells News 4 that it sent “additional documents” to the committee but did not specify what those documents entail.

Amazon says it sent the committee a letter detailing changes the company has made since the storm. According to Amazon, the company is upgrading strobe lights and sirens at all US locations and recently added a 24/7 team to monitor the weather. News 4 Investigates first discovered that Amazon was hiring a chief meteorologist in January, when Amazon did not confirm whether it was a position created in response to the Edwardsville tornado.

Amazon sent News 4 the following excerpts from the letter it sent to the Congressional committee:

“…While we have no doubt that the heroic efforts of Amazon team members saved many lives during the Edwardsville tragedy, and OSHA has confirmed that we meet the standards they expect of a responsible employer, we believe we can continue to improve and innovate on our emergency response protocols. Amazon is actively undertaking several initiatives to improve worker safety in the event of extreme weather and other disasters, including:

• Increased drill requirements: We have long required our facilities to conduct emergency response drills at least once a year. We have updated our global emergency response procedures to require that every main shift (including all contractors and on-site visitors) undergo at least one external evacuation drill and one shelter drill /of severe weather per year. Each exercise should be followed by a debriefing to assess performance.

• Alarms and Signage: Our previous procedures required designated shelter areas and assembly locations to be clearly and visibly marked and each site to have means of alerting associates in the event of an emergency. We have reviewed compliance with these requirements across our network, are updating strobe lights and sirens at North American sites, and are evaluating a mass notification system to be installed at all North American sites. North. We have also provided printed copies of each site’s emergency action procedure at each facility, ensured that all site contacts and map layouts are up to date, and developed brochures for visitors containing emergency information that is readily available to employees, drivers or other contractors at our facilities.

• Enhanced Emergency Response Training: To reinforce the safety and emergency preparedness training we previously needed, line managers and staff received refresher training on emergency response for all shifts at Amazon facilities. Additionally, all new hires and transferring associates are now required to complete onsite response training within one week of initial assignment. We are also enhancing our training content and reviewing emergency response training materials for third parties working at Amazon facilities, including materials used with DSPs and other third-party contractors, to provide robust severe weather coverage.

• Updates to Severe Weather and Emergency Response Protocols: We have updated our Global Emergency Response Development Procedure to provide greater clarity on the protocols and procedures to follow in the event of a severe weather emergency. These updates include new guidance on emergency roles, standardized definitions of weather events, and universal thresholds for operational responses to severe weather.

• Severe weather monitoring and communications: At the time of the tornado, we had already begun tracking weather events through a centralized team and coordinating unified weather and safety messaging to DSPs and delivery partners across all regions. facilities. We have since expanded this initiative by creating a Continuous Monitoring and Response Center, which became fully operational with 24-hour coverage on March 21, 2022 and has already acted on over 1,500 severe weather events. The center also improves and streamlines processes and reaction times for weather communications with DSPs, drivers and facilities.

Wolfson touts “smart reform,” but does it work? Don’t ask him.