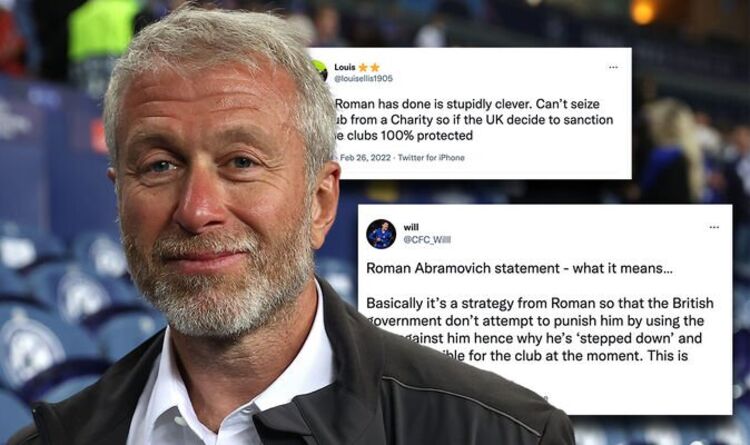 Chelsea owner Roman Abramovich has entrusted trustees of the club’s charitable foundation with running the Premier League club, a statement said on Saturday. It comes after escalating violence in Ukraine triggered a slew of UK sanctions against Russia.

Abramovich’s statement read: “In my nearly 20 years as owner of Chelsea FC, I have always seen my role as a goalkeeper for the Club, whose job it is to ensure that we are as successful as possible today, as well as building for the future, while playing a positive role in our communities.

“I have always taken decisions in the interests of the Club. I remain committed to these values.

“That is why I today entrust the trustees of the Chelsea Charitable Foundation with the management and care of Chelsea FC.

“I think they are currently in the best position to defend the interests of the club, the players, the staff and the supporters.”

Fans on social media have praised Abramovich for doing the ‘right thing’ for Chelsea, however, some believe there is a cunning reason behind the move.

“Basically it’s a strategy by Roman so that the UK government doesn’t try to punish him by using the club against him, hence why he ‘resigned’ and isn’t in charge of the club. at the moment. It’s good for the club.”

Another tweet under handle @louisellis1905 said: “What Roman did is stupidly smart.

“Can’t grab the charity club, so if the UK decides to sanction it, the clubs are 100% protected.”

Abramovich doesn’t sell the club, instead passing over “stewardship”, but it’s unclear what exactly that means.

The statement comes after reports that any sanction imposed on Abramovich would be disastrous for Chelsea.

A report from The Times said if the Russian is fined it could prompt him to demand Chelsea pay back the £1.5billion he owes him.

“But I suspect this government won’t want to upset football fans because we have a populist government. I suspect Chelsea’s legal team would look at all options.”

While some praised Abramovich for his decision, others expressed anger at the situation.

Micah Richards told Sky Sports: “We need more than that, don’t we.

“After the last two days and just saying you’re giving it to charity, I think that’s poor.

“There are so many questions to ask, to make a statement like that. What does that even mean?

“It’s almost written in code, we don’t want to tell you what’s going on, go read this and pick the bones and understand what it means.”

He has owned Chelsea since 2003 and during his tenure enjoyed years of success for the west London club.

Chelsea are due to face Liverpool in the Carabao Cup on Sunday.

BA under pressure to improve IT systems and communication after cancellations

Ukraine: what will China do? There are signs he is uncomfortable with Putin’s methods | Russia