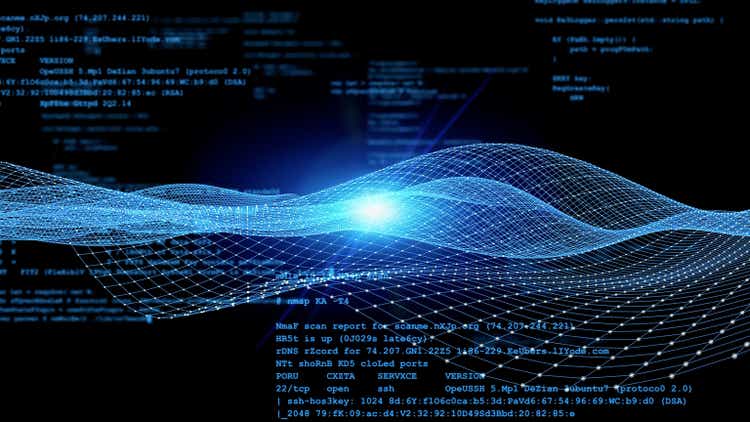 In the mid-2000s, Microsoft (NASDAQ:MSFT) was the only information technology company among the major publicly traded companies alongside the oil majors. In 2011, it was replaced by Apple (NASDAQ:AAPL) which maintains lead to date. Well, this thesis is not intended to convince you to choose one over the other, but rather to profit from both stocks using the iShares US Technology ETF (NYSEARCA:IYW). At the same time, I’ll show why despite its higher fees, this ETF is a better choice than the Vanguard Information Technology ETF (NYSEARCA:VGT) given its greater exposure to the software industry.

As a prelude to what’s to come, the blue chart shows how IYW has outperformed VGT by more than 4.5% over the past three years by delivering higher total returns, which represents price performance plus dividends just in case. these would be reinvested.

I start by comparing sectors.

First, both ETFs offer exposure to US companies, IYW followed the Russel 1000 Technology RIC 22.5/45 Capped Index while it is the MSCI Investable Market Information Technology 25/50 Index for VGT. Therefore, they follow different indexes, but most of their major holdings overlap, as I will show later.

For now, an industry comparison of the two shows that IYW owns more software assets as a percentage of the total, namely at 38.79% compared to VGT’s 34.3% (which is obtained by adding software from application and system software) as shown in the right table below.

This may not be a comparable comparison as it also includes the services component, but it still has the merit of showing IYW’s focus on software.

At this point, it is important to differentiate between technology and its subset, information technology (“IT”) which covers everything from computer hardware, electronics, semiconductors and software. Also, while most people will tell you that technology has established itself as the key driver of all sectors of the economy, I would be more specific and say it’s more about computer software. This is particularly relevant in the current economic context.

Therefore, while it is true that innovations such as robotics, Industry 4.0 and 5G enable automation to a degree never seen before, their application also involves considerable capital expenditure. On the other hand, software tools are relatively less expensive and as such fit within most companies’ IT budgets.

Examples range from the use of simple databases to manage data or emails to communicate, to the application of analytical tools available through inexpensive monthly subscriptions that provide more efficiency to the expenditure of companies. This brings us to the cost factor, because accustomed to using cheap money over the last decade of Federal Reserve money supply easing, the new economic reality means higher borrowing costs and can make adoption of sophisticated hardware more difficult, with the exception of cash-rich corporations.

Moreover, financial technologies such as fintech, health tech or edutech (educational technology) testify to the overhaul of entire sectors, via software, not forgetting the platform part.

Assets and risks associated with Tech

In this regard, platform owners Apple and Microsoft are also selling devices in the form of laptops and smartphones respectively, which can be seen as interfaces connecting their clouds to the physical world. Moreover, these companies are monetizing the age-old trend of digital transformation, which now encompasses more aspects of people’s lives.

These two stocks are the largest holdings of the two ETFs, as shown in the tables below, but there are differences in the third, fourth and fifth positions.

To that end, iShares fund managers have added shares of Alphabet (NASDAQ:GOOG) (GOOGL) and Meta Platforms (NASDAQ:META), which are part of the communications sector, while VGT includes Visa ( V) and Mastercard ( MA) which are payment processors. A similarity between the two is NVIDIA (NASDAQ:NVDA), which is a major semiconductor maker and AI gamer.

Speaking of risks, IYW’s 13.5% exposure to the communications sector proved to be a source of volatility shortly after Snap (SNAP) posted worse than expected results. A prominent economist linked the underperformance to general weakness in the economy, particularly in the advertising sector. These had an impact on Google and Alphabet which lost 7% and 5% of their value respectively on Friday, in turn causing a drop of -2.47% in IYW against only -1.56% in VGT in the part of the broader technology weakness as shown in the table below.

However, Snap has its own issues, such as competition with TikTok and vulnerability to privacy changes implemented by Apple. Thus, the drop in Google and Meta appears unwarranted, as both are diverse, with Mark Zuckerberg famous for having Told Members of Congress in 2018 said his company builds enterprise software and his engineers write code when asked if he owns a media company. As for Google, in addition to its advertising business, it has its AI-powered search engine, a global cloud platform, and the elaborate Android ecosystem that powers much of the world’s smartphones.

So Google and Meta are also software companies.

Now, I don’t want to say that there are no risks in software because any business is susceptible to an economic downturn. Moreover, a strong dollar is proving to be a headwind for the profitability of large American technology companies which derive their revenues from abroad and especially from Europe.

There are also regulatory risks stemming primarily from a lack of understanding of how software enables businesses to gain the kind of competitive advantage that cannot be explained by traditional methods of wealth generation. Regulators are also criticizing the unprecedented amount of personal data collected by big tech, which allows them to gain actionable insights into all aspects of our daily lives. This is seen as an unfair source of competitive advantage, often at the expense of other companies.

However, it is difficult for regulators to draw an impassable red line as the boundaries separating industries have become increasingly blurred over the past decade and it is quite common to find cross-industry players encroaching on each other. At the same time, the traditional business interaction lines are being redrawn as the vertically integrated economic value chain shifts to the platform economy. For example, Google and Microsoft are digitizing the supply chain using their AI and cloud infrastructures to build trusted partner relationships, while Apple is increasing the number of healthcare apps in its Appstore.

Therefore, in this new configuration where business boundaries have blurred and traditional competitive advantages have become obsolete, only those who adapt quickly, especially through the use of software solutions. Therefore, as the saying goes, “every business is a Software In this context, the largest global service providers are part of IYW and VGT, but I favor the iShares ETF because:

– It offers greater exposure to software, which is often underestimated in favor of the more visible hardware side.

– As shown in the year-over-year performance in the table below, IYW has suffered from bad Snapchat news, both recently and in October 2021while Meta shares took a hit in February 2022 after declining earnings due to Metaverse spending.

– Together, Apple, Microsoft, Alphabet and Meta account for 49.8% of IYW’s assets, which is a significant portion.

That said, IYW is more concentrated with 154 holdings, less than half of the VGTs, and therefore may be more volatile in the short term. Also, its turnover is three times higher, which indicates that changes are made more frequently to its portfolio. However, it is better to have a more dynamic asset allocation strategy at present.

The age-old trend of digital transformation that is redefining industries, whether finance, manufacturing, or energy into technologies through the use of software applications, is also setting new benchmarks for digital transformation. ‘client experience. In this new paradigm, companies are using communication tools built into the software itself to deliver a technology-driven experience, a strategy that has been gaining momentum by Covid-induced social distancing mandates.

Investors will also note that while technology companies face headwinds, the company’s software segment is less likely to be affected by supply chain issues or higher component prices. high due to higher inflation struggling with different parts of the world. On the contrary, the increasing use of software is synonymous with efficiency gains and can cushion the side effects of high inflation.

Finally, based on its higher software dosage and historical performance, as shown in the introductory chart, IYW could earn $145 by 2025 based on a 70% upside applied to the current price. share price of $85.4. That said, the tightening of the Fed’s money supply and concentration risks will make the uptrend very volatile, but this ETF is the better choice as it has generated better returns than VGT despite having six times less assets under management, pays less dividends and charges more fees.