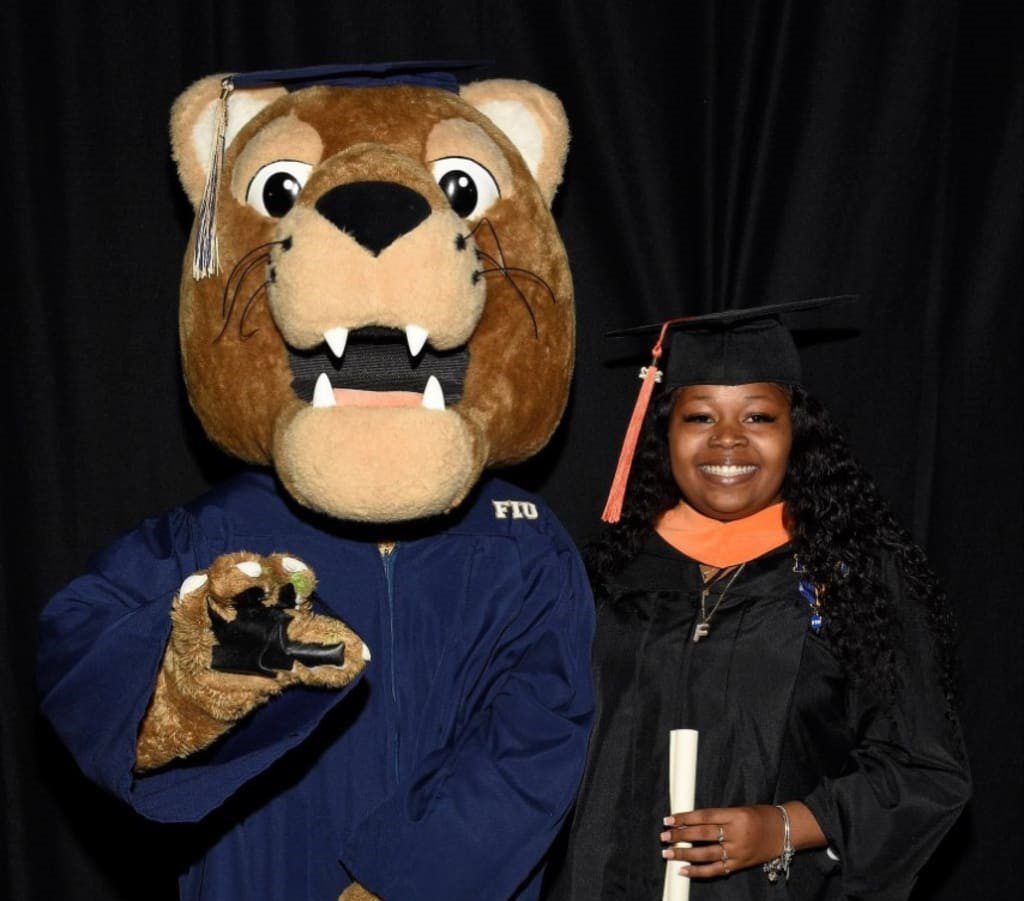 In the Master of Science in Internet of Things Program, students learn how a network of devices works to perform complex coherent actions. For Fantaysia Polanco (BS ’21, MS ’22), the program’s first female graduate, her new College of Engineering and Computer Science degree helps her connect everything in her life and uplift the people around her.

With advanced technical skills and a teacher’s heart, Polanco helps hundreds of children learn engineering and computer science. She also excels in the professional field. Within days of graduating, Polanco is working at General Motors as a software developer, helping the e-commerce industry expand its functionality.

“In many ways, I don’t think I look like a typical engineer. I like fairly long nails, pretty earrings and pink and purple colors,” says Polanco, who comes from Haitian, Dominican and Bahamian lineage. “I think I show people, especially in my community, that there are different types of engineers and that black and brown girls like me can be engineers and scientists too.”

As a young girl, Polanco saw her mother work in healthcare and her grandfather’s carpentry trade and knew she wanted to be a biomedical engineer. She ultimately chose to pursue bachelor’s and master’s studies in IoT after the program’s faculty was featured in one of her undergraduate classes.

“Taking these classes was so much fun,” says Polanco. “You get your hands dirty with different microcontrollers, sensors, networking tools, and IoT platforms.”

In one of its courses, Polanco and its group partners, Luis Leon and Nicolas Contreras, designed a proof of concept for a wearable device intended to help people prone to epileptic seizures. The proposed device was a monitoring system based on a low-power Bluetooth communication scheme that recorded immediate changes in heart rate and skin characteristics to detect if an individual was having a seizure. The device automatically notifies the specified people or family members.

Throughout his courses, Polanco studied the physical and software components of electronics, with an emphasis on how devices communicate with each other.

“People don’t realize how many IoT devices they actually have in their homes,” says Polanco. “We have televisions, remotes, thermostats and even refrigerators sending shopping lists to our phones. There’s so much data transmission that we don’t see.

While studying at CRF, Polanco became a skilled coder and participated in internships and selective programs such as the McNair Scholars program, which is designed to increase graduate degrees for students from underrepresented segments. of society, including first-generation and low-income people. As a McNair Fellow, she developed a pipeline that uses QIIME2 for bioinformatics analysis of the microbiome under the supervision of Professor Kalai Mathee at Herbert Wertheim College of Medicine and Professor Trevor Cickvoski at the Knight School of Computing and Information Sciences. Additionally, she completed an intensive bioinformatics internship where she worked on deploying containers in the cloud using Amazon Web Services and Docker. Polanco also participated in UPE Sparkdev, UPE Shellhacks and HackGT hackathon.

In addition to her academics, Polanco was a resident student housing assistant, an active member of numerous organizations, and a board member of the National Council of Negro Women (NCNW) as well as the National Association for the Advancement of Colored People. . (NAACP). All of these projects and organizations taught Polanco the value of collaboration by working in groups and helped her develop leadership, time management and critical thinking skills. These characteristics should help her in her new job at General Motors, where she will work with the eCommerce department.

Polanco also applied his upbringing to give back to children. Over the past three years, she has taught over 200 children as young as 7 years old about virtual reality, coding, robotics and 3D printing.

With the Verizon Innovative Learning program at FIU this summer, she helped kids design their own 3D structures, among many other projects. She also printed their drawings for the children to take home. While working with FIU All-Stars at both undergraduate and graduate level, Polanco traveled to several Miami-area schools, where she taught middle school students Scratch coding and virtual reality. Polanco now teaches young people around the world about python, circuits, 3D printing and machine learning/AI through an online homeschooling platform.

“Some of these kids are such advanced coders,” Polanco says. “Technology is kind of taken for granted, but in many ways it offers endless possibilities.”

When Polanco came to college, coding was scary, she says. None of her immediate family working in the tech industry could guide her.

The younger generation of his family will not experience the same thing.

“I have a little cousin, and she wants to be an engineer. I love talking about coding and 3D printing with her,” says Polanco. “It warms my heart to be as inspirational as possible.”

As Polanco continues to reach out to young people to encourage them to consider engineering, it looks forward to many more firsts. She would like to thank all the CRF teachers and mentors she has met throughout her journey.

For those interested in learning more about the university’s MS in IoT degree, Florida’s premier IoT graduate degree, check the program’s website.

This story was first published by FIU News here and is republished with permission.

IT security is the first priority when preparing for risks

Brendan Fraser peaked in Hollywood. Why it took him so long to come back