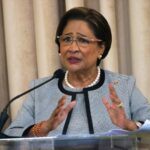 IS IT THE LATT OR THE COSA NOSTRA?

1. I note that the LATT issued this statement even though its president, Sophia Chote, has publicly stated that the organization would not comment. I raise the following questions:

a) What explains this U-turn?

b) How many members were consulted prior to the release of this self-serving statement. Was there a wide consultation of the members or was the consultation limited to only the fragile crawlers?

c) Is this reversal due to my comments pointing out that some are not disclosing serious conflicts of interest because recipients of state board appointments and/or multi-million dollar state files have bruised by fragile egos?

2. The fact that many lawyers are afraid to publicly express their views on this issue speaks to the unacceptable culture of secrecy maintained by some selfish and crawling members.

3. I wish to remind the LATT that the motion of no confidence was not a mere motion against a member or simply concerning members’ business, but was related to one of our country’s most senior officials based on facts regarding his conduct when undertaking actions on behalf of the State.

4. I also point out to the LATT that the GA itself publicly announced the results of this meeting in the political arena as a sort of support for its office, thus bringing this meeting further under public scrutiny. It is therefore my duty, not as a member of the LATT but as the leader of the opposition of this country, to comment on this decision which Mr. Armor has publicly hailed as trusting him.

5. The public has a right to know that the AG’s lie was defended by some lawyers with ridiculous and childish statements. Some of the most shameful examples are:

“The gentleman was on vacation with his family in Europe in a hotel room and I don’t know sometimes I don’t know what kind of hotel room he was in but some of these hotel rooms in Europe are very small hotel rooms, you have, you are in the middle of [a] city, he does not have access to his papers.

“The error is human”.

“I would say Reggie Armor is my friend, so let me put that on the table for those who want to say I defend him and I’m against this motion because he’s my friend, he’s not a Fishing”.

6. It is of grave concern that:

a. Many of those who bowed down in favor of AG Armor (and there is no doubt that they have a right to do so) failed to disclose that they were receiving important state records and/or positions on the Council of State.

b. They did not refute the actual evidence presented against the disgraced AG Armor regarding his lies.

vs. The idea that public learning of these statements somehow compromises the apparent sanctity of LATT meetings is a view I do not share. In my view, this disclosure only jeopardizes the position of the “legal aristocracy” who believe that there is one law for ordinary citizens and another law for disgraced AG Armour.

I call on the LATT to make the transcripts of the special meeting public. Failure to do so will only harm the organization in the eyes of a knowledgeable and educated public.

Attorney General Armor may think he can rely on the protection of his friends in the inner bar to shield him from public accountability, but he would be gravely mistaken. As his disqualification in a Miami court showed, he can’t hide from the truth.

It’s Complicated: Understanding the Complexities of COVID, Motherhood, and Mental Health in the Black Community

Face masks have changed our use of language. It affects how children understand speech