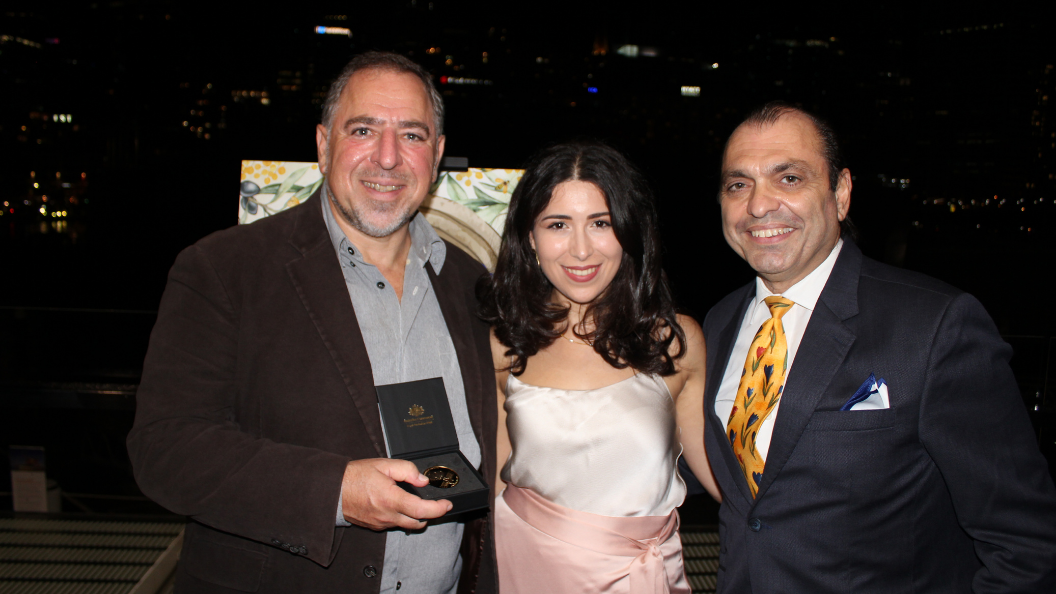 “It’s a piece of our history”: why three proud Kytherians bet on the centenary medallion

Picture this: it’s the launch party for the Kytherian Association of Australia’s (KAA) centenary celebrations and there’s a live auction of the first three 100-year collector’s edition medallions, which were designed by Zoe Sophios and produced by the Royal Australian Mint.

Bids back and forth between a number of proud KAA members before the first medallion is finally claimed by none other than Peter Maneas of My Greek Odyssey for $20,000.

To celebrate these successful auctions, we simply had to find out what made these three proud Kytherians want the medallion in the first place. Here’s what they had to say:

Peter Maneas’ instant response to the question of why he bid on the medallion was, “I would do anything to help the Kytherian Association of Australia.”

“They’ve been around for 100 years and we want them to last another 100,” the host of My Greek Odyssey added.

“My family goes back, recorded anyway, 15 generations in Kythera. I live in Australia, it’s 15,000 kilometers away, and we just want to keep our history and culture alive as much as possible for as long as possible.

And now that he has the medallion and a piece of Kythera’s history in his possession, what does he intend to do with it?

“The medallion sits on my desk in my office, overlooking the window. So when I’m working it will always be there along with a few other little pieces that I’ve collected over time,” Maneas explains.

Jean Sophios tells The Greek Herald he decided to bid on the medallion as it is “a unique and succinct physical representation of Kythera’s long history in Australia and a testament to the successful connection the Australo-Kytherian diaspora has maintained with our island for the past 100 years”.

“It serves as a reminder of our connection to our ancestors and our ancestry, and it embodies the love we have for the island of Kythera as its descendants,” Mr. Sophios said.

“Furthermore, I believe it commemorates the contribution made to KAA by thousands of members who have supported initiatives and volunteered their time and labor over the 100 years to create the success of the Association.

“My family and I moved to Sydney from NSW in the mid 1970s and KAA was instrumental in helping us make new friends and settle into our new surroundings.

“Our association with the Kytherian community is strong and longstanding and I feel very privileged to have served as the chair of the youth committee and the board. Essentially, I bid for the piece because of that personal connection. .

What does Mr. Sophios plan to do with the locket now?

“I’m hesitating between donating it to the Kytherian Museum in Hora or the Powerhouse Museum here in Sydney,” he concludes.

KAA President Emmanuel Alfieris claimed the third medallion of the night and he recounts The Greek Herald he made an offer because “it is an impressive artifact that is part of our history”.

“I’m going to bid on more pieces so I can give one to each of my children,” Alfieris continues.

“For someone like me where my grandfather, my father, my uncles, my brother, my cousins ​​and myself have all contributed to the Association, I think it is important that my children have this memory at home.

“Throughout their lifetime it will grab their attention, or a guest will ask ‘what is it’, and they will reflect on what their predecessors did and remind them of their own community obligation.

“It is an artifact that will remain in Kytherian homes for generations.”

Mr Alfieris adds that the fact that the medallion was designed by a young Kytherian and minted by the Royal Australian Mint also played a role in his candidacy.

“For us Australian Kytherians there is incredible poetry in having the Royal Australian Mint strike a coin with the map of Kythera on one side and Aphrodite on the other. It is a rare privilege to do strike a coin by the Royal Mint,” the KAA chairman said.

“There is a fairly refined process for obtaining approval, including the Mint’s Board of Directors agreeing that it is consistent with its historic purpose. I’m proud that they felt KAA’s centenary year was part of their mission.

“I [also] making the buzz that the piece was designed by a young Kytherian, Zoe Sophios. Zoe is only 20 years old and she has spent countless volunteer hours designing this amazing artifact.

“It makes me confident that the Kytherian Association of Australia remains vibrant and still has a bright future.”

Scammers ‘romance’ victims, convince them to buy cryptocurrency and send it to a fraudulent exchange

After injury, it would have taken a wrecking ball to remove Gindorff from Bison football – InForum