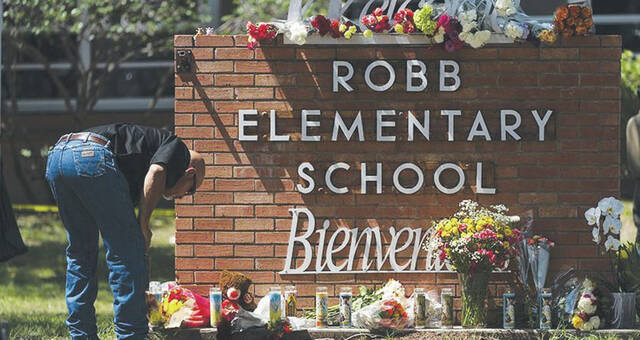 defender of the people

The words I keep seeing on social media, “It’s not supposed to be like this.”

We hug them and kiss them goodbye; we tell them, “Have a good day – make good choices,” and we watch them get out of the car or get on the bus. We don’t think this will be the last time we’ll see them. We don’t imagine they won’t come home. We will not let ourselves go into this darkness of thought until it happens again. Another place, another shooter, another family who never thought something so heinous was possible – not in their schools, not in their churches, not in their stores. Evil prowls armed and dangerous.

We struggle to balance the rights of those responsible with the need to deny those same rights to the wicked before they have committed an iniquity – before they have killed an innocent. We seek a preventative measure to protect the innocent without restricting the right of responsible citizens to bear arms.

“The school shooting in Uvalde, Texas is heartbreaking in every way, shape and form – a tragedy that is unspeakably heartbreaking for these parents and students and for our entire nation. Sadly, this is not the first time we have witnessed such an upsetting event.As someone who was targeted by a deranged gunman in the Congressional baseball shooting, I know there is room for debate about the sensible actions we can take to protect our communities while respecting constitutional rights. But I also think we need to carefully consider the deeper cultural issues behind these events,” said Rep. Brad Wenstrup. not in our homes, our society and our communities that would lead a person to act in such a violent way may well allow us to stop the repetition of these horribly d painful year after year.”

According to ScientificAmerica.com, the Robb Elementary School shooting in Uvalde, Texas, ranks second worst mass school shootings since Columbine in 1999. At least 19 children and two adults were killed in the shooting. from Uvalde on May 24. On February 25, 2022, a report on www.marca.com explained that relatives were waiting outside the Uvalde civic center for DNA test results because “the bodies of the victims were unrecognizable due to the firepower used “. Sarah Zhang explains in her 2016 article for www.wired.com: “All guns can kill, but they don’t kill in the same way.” She explained that the AR-15 was originally designed for special operations and that the bullet from an AR-15 inflicts a different kind of violence on the body.

One cannot help but look at the photos of the faces of the victims without wondering what one can do? How far are we going for gun rights and gun reform? How do we protect the rights of citizens and protect our institutions from human invasion and destruction?

Adams County Sheriff Kimmy Rogers said, “No one knows why these things are happening. One person accuses this and another that. Schools must be fortified. On May 26, 2022, www.nbcnews.com reported that the school (Uvalde) had an extensive safety plan. As the investigation continues, more information is uncovered and reported on how the attacker entered the school and was allegedly barricaded in a classroom.

There were warning signs and messages via social media. On May 26, www.washingtonpost.com reports that the shooter, “On May 17, a day after he turned 18, he went to a gun store to buy an AR-style rifle. He bought some a second a few days later. The article included: “There were a series of cryptic messages on social media – including to seemingly random teenage girls in Germany and California – that offered pictures of guns, ammunition and clues to his desire to hurt and kill.”

The defender contacted Dailey’s Outfitters in Peebles, Ohio to ask about the background check process for people buying a gun. Dwayne Dailey explained, “It goes through the FBI NICS (National Instant Criminal Background Check System).” The process takes anywhere from five minutes to three business days. The Defender asks under what conditions a weapon is refused. Dailey replied, “They don’t give us a reason. They just tell us if it is continuing or if it is delayed. He continued: “There’s a lot of misinformation out there where people think there’s a loophole or you can buy a gun without a background check, but commercially any company has to do a background check. .” According to www.fbi.gov, “If the FBI cannot make a decision within three business days of a background check, the FFL may transfer the firearm, unless state law prohibits it ( pursuant to the Brady Handgun Violence Prevention Act of 1993.)”

The Adams County Ohio Valley School District prioritizes the safety of children and staff. Superintendent Richard Seas says, “Safety is of the utmost importance. We have always taken security seriously. We currently have three SROs (School Resource Officers) in each attendance area – Peebles, West Union, North Adams and a Director of Safety, Mike Parker. Seas continued: “We have accelerated and we have increased the measures in place for security.”

Seas said legal counsel advised the district not to arm staff members. On June 23, 2021, the Supreme Court of Ohio ruled that school personnel must complete more than 700 hours of peace training before carrying a gun on the job. Seas said: “It’s a nation’s worst nightmare. Security is more than just arming a staff member, which needs to be discussed. What are you doing on the prevention side? I’m proud of a lot of what we’ve done here. We worked with the Ministry of Health. We will spend $300,000 over the next three years in collaboration with the University of Cincinnati. We have what is called a stabilization program where we can meet the mental health needs of students.

Mike Parker, the district safety coordinator, and school resource officers are certified deputy sheriffs. He says, “We put out small fires every day before they become big fires. He and Thomas Putnam (SRO) have completed Trauma-Informed Practitioners training and are certified. Of the training, Parker said they “identify issues, try to mitigate whatever is going on, and send available resources their (students) way and parents. It has proven to be very successful in the fight against mental health. Seas said staff are aware of the Handle with Care program. According to the handwithcareohio.org website, “If a law enforcement officer or other first responder encounters a child while on a call, that child’s name and three words, HANDLE WITH CARE, are passed to the school/child care before the school bell rings the next day The school implements trauma-informed individual, classroom and whole-school strategies so that potentially traumatized children are “treated with care.” If a child needs further intervention, trauma-informed mental health care is available at school.

Parker also notes that Adams County is home to the Tactical Defense Institute (TDI), located in West Union. TDI offers firearms and physical self-defense training for civilians, law enforcement, and military. TDI owner John Benner reports that they offer a course on “active killers”. He said, “We’ve done all kinds of things across the United States. We work for the International Association of Law Enforcement. He continued: “At the end of the day, if someone is not there who has a gun on the scene, it takes too long. There are layers of protection they need at school.

ACOVSD conducts three theatrical shooting exercises per school year. Parker says, “Staff and students are all involved in procedural reaction time testing, facility security and alarm testing. He continued, “We always like to go above and beyond, so we have tabletop exercises where we get the staff together and give them a script and let them talk about it.” Parker describes a modified version of the tabletop exercise in which a student and staff are given a verbal scenario. This exercise encourages good conversation and problem-solving processes.

Tiffany Walsh, a fifth-grade teacher at North Adams Elementary School, responds to Tuesday’s shooting: “I’m devastated. It’s just awful. I had 19 children in my class last year. What if it was my children?

Parker communicates that the Adams County community’s response to the recent shooting in Uvalde, Texas was one of support. Some have asked, “What should we do next year?” What can we do differently? Business owners have also reached out, ready to donate resources. He says, “We are a tight-knit community here. When it comes to our students, everyone stands together when it comes to safety.

In many conversations this week, I remembered a time before Columbine when school shootings weren’t something we rehearsed for. There was a time when school felt safe, and the only drills practiced were for fire or tornado, and most of the children were happy for the break that took them away from class work. Humanity is sacred, so hope for healthy debate, wise counsel, and collective concern as lawmakers face this challenge. Social media has at least one thing correct – it’s not meant to be like that.

Texas teacher who locked door says she thought it was locked

The Worst Agency Mistakes Ever Made (Brands Always Pay For This)