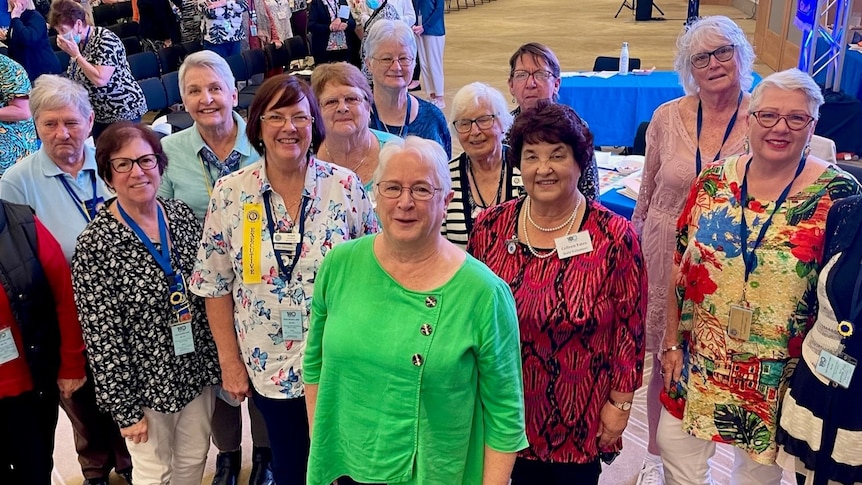 It’s taken 100 years, but the Country Women’s Association of NSW is ready for change

For 100 years the Country Women’s Association of NSW has carried on the traditions of its founders, but at its annual conference in Sydney there is a mood for change.

A motion was passed to revise the association’s motto, which is recited at the start of every meeting at branches statewide.

Some branches say lines about God and service to the throne discourage people from joining and have even caused some members to leave.

Odette Nettleton of the Kyogle branch of the Country Women’s Association (CWA) says there will be a referendum to give everyone a vote on whether to change or keep the motto.

“The motto was introduced in 1922 when demographics were very different; 98% of the population identified as Christian,” Ms Nettleton said.

This number has now halved, but the organization will move forward cautiously as previous attempts to change the currency have failed.

“We didn’t want to say it had to change, we wanted to say, ‘Please, we should talk about [it]’…to make sure that any woman who wants to join feels included,'” Ms Nettleton explained.

In its centenary, the organization calls for a ban on political donations from fossil fuel companies, protection of valuable farmland, country of origin labeling laws to support Australian farmers and immediate action on the crisis health care in rural and regional areas. NSW.

Although some of today’s issues may differ from those of a hundred years ago, the CWA has always campaigned vigorously to improve the lives of rural women.

Author Liz Harfull has written a book on the history of the CWA.

She said the conditions for women were appalling at first and the founders felt they had to do something about it.

Women lived at a distance, far from services, and it was expensive.

“In the 30 years before the CWA was founded, approximately 9,000 women died in childbirth.

The children’s toll was higher.

“During the First World War, as many children died in Australia as men fighting at the front; around 60,000,” she said.

The founding president of the organization, Grace Munro, originally from Bingarra, was among those who lost a baby.

“This tragedy stayed with her for the rest of her life,” Ms Harfull said.

The organization has campaigned to establish baby care centers, fund bush nurses, build and staff maternities, hospitals and schools, as well as rest homes, seaside holiday homes and at the mountain.

They have also stepped in to help key rural industries like the wool industry.

“It was struggling just before the Depression, with a drop in sales due to synthetics…so they decided crafts should be part of every branch meeting,” Ms Harfull said.

The organization talked to manufacturers about using wool to fill mattresses and they convinced a Sydney company to produce looms that helped establish a cottage industry of woolen blankets.

Along with changing traditions there has also been a change in leadership, with Dunedoo’s Joy Beames appointed as the association’s new president.

Ms Beames has been a member of her Dunedo branch for three decades and wants people to buy Australian products.

“I’m passionate about it and have been for a long time,” she said.

She highlighted products like Colgate toothpaste, which is made overseas, evaporated milk from Mexico, or condensed milk from Lithuania or Singapore.

“Free trade is important and we need it, but we can always choose what we buy,” said Ms Beames.

“I just think the CWA is in a perfect position to push and encourage people to buy Australian products.

And of course, cooking remains an essential part of CWA’s activities as a means of bringing women together.

The tradition of making tea and scones for the tea house at the Royal Easter Show will continue to raise funds for the crucial work of organizations in Australia and overseas.

‘They won’t do anything to fix it’: Why the NBN still matters to many voters | National Broadband Network (NBN)