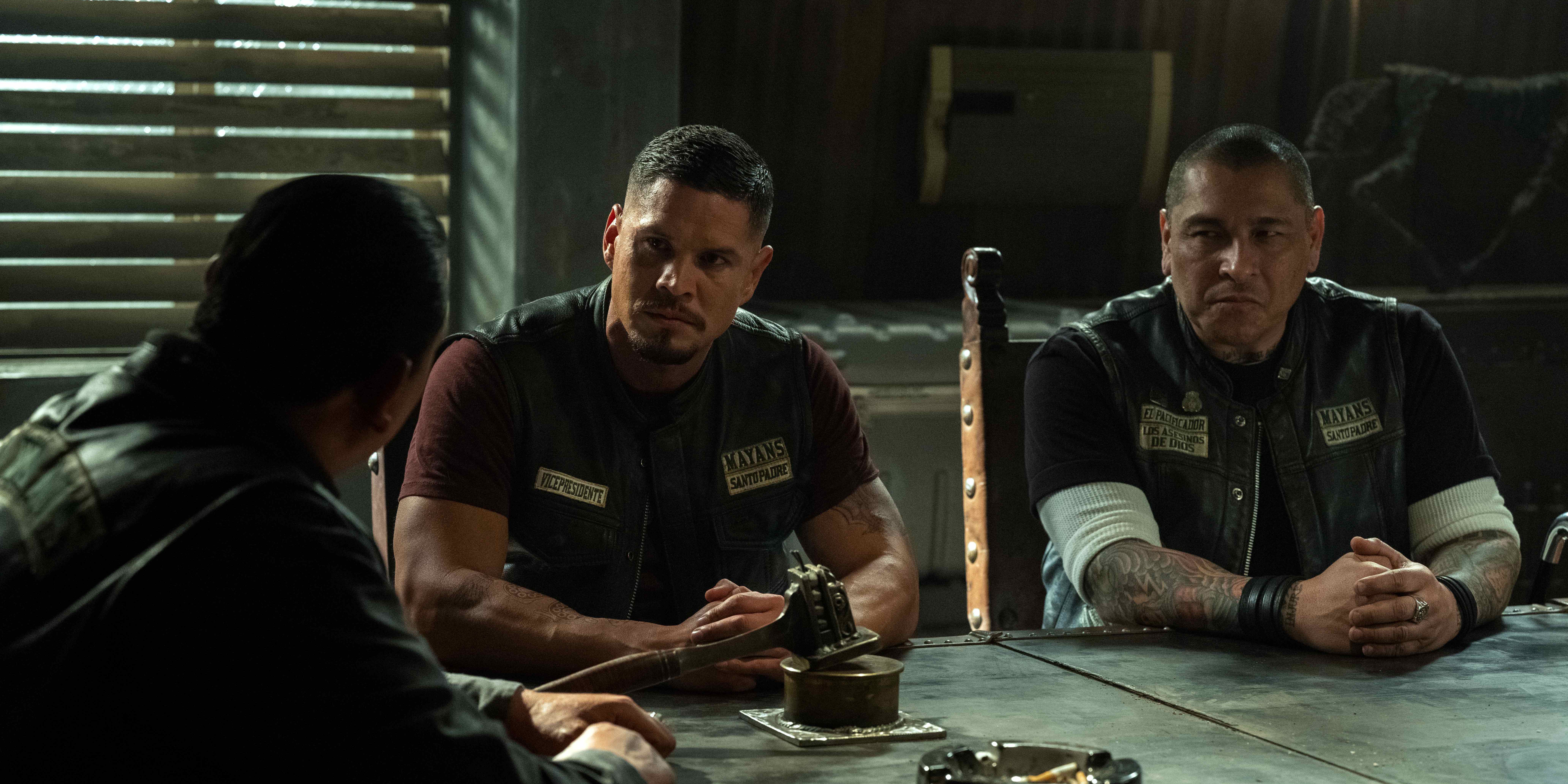 Mayans MC’s War With Sons of Anarchy Could Destroy It

In “When I Die I Want Your Hands Over My Eyes”, Marcus Alvarez – the godfather of the Mayans MC and current charter president of Santo Padre – does absolutely everything he can to prevent a war with the Sons. of Anarchy. Early in the episode, Alvarez learns from Hank that Oakland was able to positively identify his attackers as part of the Sons of Anarchy. However, Alvarez asks Hank to shut up so he can figure out how to proceed. This angers Hank, who wants revenge on Coco right away. Later, EZ Reyes asks Alvarez for an update on the situation, but the Godfather avoids giving him a straight answer. Instead, Alvarez emphasizes how dangerous a war could be and that it isn’t worth it. Alvarez makes it clear that he wants revenge on Coco, but an all-out fight with his killers won’t help the situation.

In the end, the Mayans of Santo Padre get confirmation from Manny – a member of the Mayans of Yuma – that the Sons of Anarchy are responsible for the attack on Oakland. Alvarez is still trying to convince them not to go to war, but Santo Padre’s charter makes it clear that they won’t be deterred. EZ even reveals a plan to kill a number of senior Sons of Anarchy brass at UC Davis as revenge. EZ’s thinking here is, essentially, the Mayans will hit the Sons of Anarchy hard enough that they’ll regret going after them in the first place. EZ, Angel and Manny – the same people who killed El Banquero’s accountant – find themselves in charge of the mission. Alvarez gives the green light, and the Mayans are officially at war.

Alvarez is, in many ways, right. The Godfather keeps insisting on investigating what happened before going to war. The Sons of Anarchy attacked the Mayans because they believed the group had killed Montez. They don’t know that the Mayans are not responsible for the character’s death. Instead, El Palo, the now deceased president of the Vatos Malditos Motorcycle Club, killed the Sons of Anarchy Road Captain. While Taza hiding Montez’s body and kutte in a barrel on Santo Padre’s clubhouse property would certainly have consequences, it’s not the transgression the Sons of Anarchy think they’re repaying. Many problems in this situation can be improved simply through good communication. However, the Mayans will now retaliate against the Sons of Anarchy, believing the group attacked them essentially unprovoked. The two groups are again caught in a cycle of violence in which they kill each other to avenge those they have lost.

RELATED: Mayans MC Continues to Pay Tribute to Late Pavia Actor Roel Navarro A war like this is sure to be bloody, and the Mayans MC may not emerge victorious. The group is still reeling from their Civil War, and the various charters are still incredibly suspicious of each other. Knowing the reason for the violence started with Santo Padre may very well doom this particular charter, but that’s assuming the Sons of Anarchy and Mayans MC can really sit down and chat. Chances are the violence will reach the point where a weakened Mayans MC finds itself up against a mighty Sons of Anarchy, and the series titular club may end up taking a blow they can’t survive.

New episodes of Mayans MC air Tuesdays on FX. The next episode of the series, “Dialogue with the Mirror”, is released on May 24.

Liam Nolan is an associate editor at CBR. You can find him on Twitter @LD_Nolan.

Stream it or skip it?