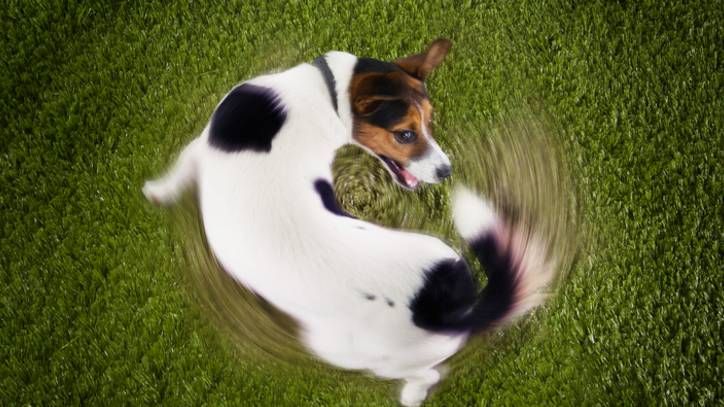 OCD in dogs: does it exist and what can it look like?

Obsessive Compulsive Disorder, or OCD, is a mental health condition that typically causes persistent, unwanted thoughts (obsessions) followed by repetitive behaviors (compulsions) in humans, but can dogs have OCD too?

Canine compulsive disorder (CCD) shares many similarities with OCD in humans. The process of diagnosing CCD can be lengthy, so owners are always recommended to purchase pet insurance. (opens in a new tab) before getting a dog to help offset the financial burden of unexpected health issues.

Let’s take a closer look at CCD, including its causes and how it is managed.

Can dogs have OCD?

Although dogs can have a condition similar to OCD in humans, it is generally referred to as “canine compulsive disorder” because, although affected dogs display compulsive behaviors, they cannot tell us if they are having obsessive thoughts. .

Canine compulsive disorder is characterized by repetitive behaviors that have no specific purpose and persist regardless of the dog’s environment. These behaviors often stem from normal behaviors like grooming or movement, such as flank sucking or tail chasing.

Although many of these behaviors may be normal in the presence of a stimulating trigger such as stress or boredom, dogs with CCD frequently display compulsions and may appear to lack control over their behaviors.

What causes dogs to have CCD?

There is no single cause for CCD, but several factors can contribute to its development. These include:

Studies have found evidence that CCD can be hereditary in dogs. Additionally, a study conducted at Tufts University (opens in a new tab) identified a gene on chromosome 7 that predisposes dogs to developing the disease.

Certain breeds are more likely to develop CCD and display certain compulsions, such as spinning in Bull Terriers, flank sucking in Doberman Pinschers, and shadow staring in Border Collies.

Neurotransmitters such as serotonin and glutamate are believed to be altered in the CCD, thus affecting the brain’s ability to send messages to the rest of the nervous system.

Extreme response to stress or frustration

When dogs are very anxious or lack mental and/or physical stimulation, they may display repetitive behaviors to calm themselves down or entertain themselves.

If their needs are not met in a timely manner, these behaviors can progress to CCD in some dogs.

Certain medical conditions cause dogs to exhibit compulsions that can eventually lead to CCD. An example of this is acral lick dermatitis secondary to issues like arthritis or skin allergies, which occurs when a dog continually licks its legs or feet, causing hair loss, skin irritation and sometimes even an infection.

How do you know if your dog has a CCD?

Affected dogs may engage in these behaviors in the absence of a stimulus or trigger. The condition usually appears within the first 2 years of life when the dog is an “adolescent” or young adult.

There are several medical issues that can cause at least one of these behaviors, including seizures, exposure to toxins, and skin conditions, so CCD can only be diagnosed once the other underlying causes are excluded.

If you suspect your dog may have CCD, your veterinarian will take a thorough history, perform a physical exam, and perform diagnostic tests like blood and urine tests.

How is CCD managed in dogs?

When a dog begins to exhibit these repetitive behaviors, they should be redirected to another activity, such as training commands, and rewarded once they no longer display compulsions and calm down.

Additionally, providing additional mental and physical stimulation through the use of toys or puzzle games and exercise can tire them out and ease their anxiety.

Although these changes can help some dogs when started early, most dogs with CCD (especially those with a genetic component) need medication to treat their condition.

The most common drugs used to treat CCD include selective serotonin reuptake inhibitors like Prozac and tricyclic antidepressants like clomipramine, which are also frequently used in the treatment of OCD in men. Dogs usually begin to respond to these medications after 3-4 weeks of treatment.

Many dogs with CCD benefit from seeing a behavioral specialist – your veterinarian may wish to refer you to a board-certified veterinary behaviorist if they find no underlying cause for the compulsive behavior.

Dr. Diana Hasler (opens in a new tab) graduated with honors from the Royal (Dick) School of Veterinary Studies, University of Edinburgh in 2018. She has experience as a small animal vet in general practice, where she has treated many dogs, cats, rabbits and rodents. She has also recently branched out into the field of medical communications, working on her own as a copywriter and medical writer.

Can CCD cause aggression in dogs?

Aggression is often a move behavior when a dog is experiencing stress or anxiety, so dogs with CCD that are not managed properly may show signs of aggression if interrupted during compulsive behaviors. A study by Overall et al. (opens in a new tab) found that 28% of dogs with CCD exhibited aggression related to dominance or impulse control. Dogs with CCD may also direct aggression at themselves and self-harm.

It is crucial that dogs with CCD are diagnosed and treated early to minimize the risk of them becoming aggressive to their owner’s safety and their own well-being.

Is CCD in dogs curable?

Like OCD in humans, CCD is usually a chronic, lifelong disease that cannot be cured. Fortunately, it can be controlled with proper management, and dogs with CCD can live long, happy, and healthy lives.

What is a Fitbit and how does it work?