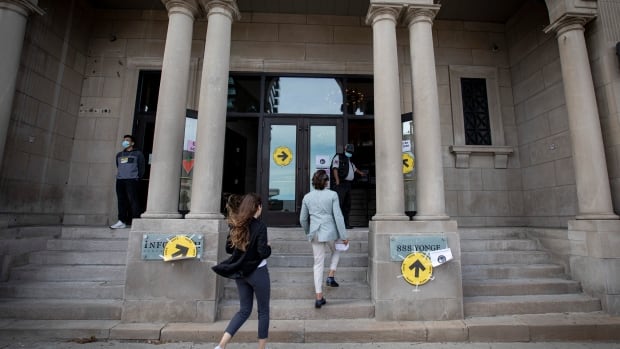 Online voting is more available than ever. So what effect does this have on voter turnout?

Voting online can be as easy as a few clicks from the comfort of your own home. This convenience is one reason why online voting is often touted as a way to potentially increase voter turnout.

Ontario has allowed Internet voting in municipal elections for nearly two decades. Nearly four million people were eligible to vote online in last month’s election, but the majority did not vote at all.

Figures compiled by CBC News suggest that in Ontario, technology has not had a significant impact on voter turnout.

“It’s a convenience method for voters … but it’s not really the kind of thing that gets people to vote,” said Jon Pammett, a distinguished political science research professor at Carleton University.

For this article, CBC collected data from Ontario municipalities that have allowed online voting for at least two elections and each have more than 50,000 eligible voters. The complete results of the 13 municipalities are below.

Four of these municipalities (Cambridge, Kingston, Ajax, Chatham-Kent) continued to register an increase in the second election, but these gains have since been lost.

“The data tells us that the novelty of the introduction is getting some attention and people are saying, ‘Oh, something new,'” said Dennis Pilon, associate professor of politics at York University in Toronto. “But it doesn’t last after a few uses. Now it’s ordinary.”

Markham and Peterborough have used online voting the longest. Markham has seen an upward trend in turnout and remained largely in the mid to high 30% range, while in Peterborough turnout has fallen almost steadily from a high of 48 to 40%.

The remaining four municipalities (Brantford, Pickering, Kawartha Lakes and Newmarket) have only seen turnout decline since the introduction of online voting.

A 2018 study looking at Ontario municipal data from 2000 to 2014, it was found that technology can increase participation by 3.5 percentage points.

“I think there’s an effect on participation. I think it’s a modest effect,” said Nicole Goodman, an associate professor at Brock University in St. Catharines, Ont., and one of the co-authors of the report.

Goodman cites others studies who have found methods that make voting more convenient, such as mail-in voting, can increase voter turnout by two to four percent.

“The effects of Internet voting on turnout have always been a bit mixed,” Pammett said.

He said the technology is helpful for those who may have difficulty getting to a polling station due to illness, for example.

Pammet co-authored an article on Internet voting for Elections Canada in 2010, but he said the agency had since dropped the idea. The federal government and several major cities, including Toronto, have ruled out the use of the technology, they say, for security reasons.

“[Online voting] is not capable on its own of engaging people politically, getting them interested in elections…if they are truly on the fringes of the vote in the first place,” Pammett said.

Municipalities tend to have lower voter turnout in provincial or federal elections. To explain this, experts point to a myriad of factors, including what Pammett calls “a lack of information.”

“People, although they might like to vote, don’t feel very comfortable voting if they don’t know what they’re voting for.”

Ontario does not allow political parties at the local level, so candidates run as individuals with no party affiliation.

Pilon, of York University, said political parties can help voters understand where a candidate stands on a certain topic.

Renan Levine, who teaches politics at the University of Toronto, notes another factor is the decline of local media, with national and regional media focusing primarily on races in big cities.

“Some of the things that jump out at me from this data are that we don’t see clear patterns across the board,” Levine said. “[That] would suggest that much of what we see here has to do with very local factors.”

That could include non-competitive races, he said.

Voter turnout in Newmarket, Ontario, for example, has stayed in the mid-to-low 30% range for several elections, but has dropped 10 percentage points this year.

City Clerk Lisa Lyons pointed out that in last month’s ballot the mayor and two ward councilors were cheered, meaning no one ran against them, “which historically impacts on voter turnout.

Provisional data from the Association of Municipalities of Ontario suggests overall voter turnout in the province has reached 33%, up from just over 38% in 2018.

Experts say it’s unclear why voter turnout has fallen, but they also point to a historically low turnout in Ontario’s provincial elections, which fell to 43% in June.

“The kind of results we’ve seen provincially suggest there may be a bigger problem in terms of voter engagement,” Pilon said.

At the federal level, voter turnout remained in the 60% range interval in all but one of the last 10 elections.

Neither Pilon nor Pammett believe that introducing online voting in federal elections would lead to higher turnout.

“Internet voting is a great opportunity for people who are already committed to voting,” Pilon said, adding that it just gives those voters another option.

The figures from Estonia confirm their point of view. The Eastern European country was the first in the world to allow online voting in national elections.

Since 2007, the country has held four votes, but turnout has remained between 60% and 60%. interval.

“It’s stable, comparable to the period before the introduction of internet voting,” said Mihkel Solvak, associate professor of technology research at the University of Tartu in Estonia.

“The explanation behind this is that in fact your typical voters who used to vote on paper have gradually moved to internet voting.”

The country moved to introduce technology to boost youth voter turnout, but it said turnout in the 18-25 age group was actually declining.

“We can’t solve low voter turnout with technology, that’s the big lesson of, say, the actual implementation of Internet voting.”

A study outside the United States confirms this.

Anthony Fowler is a professor at the University of Chicago School of Public Policy. He studied voter turnout in West Virginia, which he says was the first state to allow foreign voters to vote online in the 2018 U.S. federal midterm election.

Fowler said nearly half of the counties in the state had chosen to allow online voting, so he was able to compare those who could vote online to those who had to vote by mail.

“I believe that participation has increased among [online] group by something like three to five percentage points,” he said.

“It’s not a massive effect, but it’s bigger than the effects of many other kinds of performance, certainly bigger than many efforts to get the vote.”

Goodman, who studies online voting at Brock University, said more research is needed to understand the overall impact of online voting on turnout.

“I don’t think we’ve necessarily had the right data or experience to study or look at this problem.”

Several Ontario municipalities, including Kingston, Markham and Burlington, point out that the overall percentage of votes cast online increases with each election.

Some cities, however, have removed or limited paper ballots, so internet voting is the only option.

She said the city will continue to offer the technology.

Mark Guinto, spokesman for nearby Pickering, said that was also the case for his town.

“At a time of declining voter turnout, it’s critical that we provide our residents with more accessible and convenient voting options.”

What does it mean to be a charity? | Guy Dampier