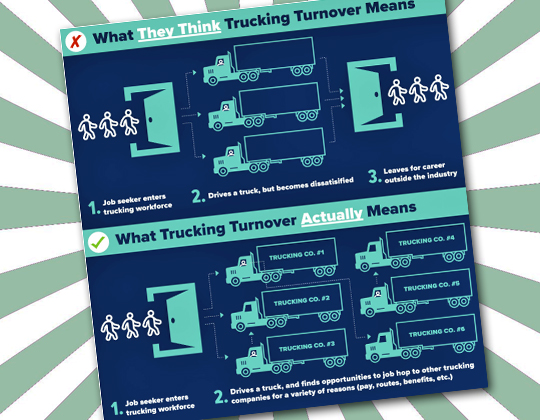 Hey, driver, you’ve never eaten it so well! You are living the American dream!

You do not believe me ? No less an authority than the American Trucking Associations says in a recent blog titled “The Truth About Trucking Turnover.”

In case you haven’t read it, you’ll be glad to hear that driver rotation is a good thing. You can move between jobs to increase your salary and earn signing bonuses. According to ATA, the driver turnover rate of 90% is mainly due to turnover, as drivers change carriers. This is a sign of opportunity!

“In many ways, high turnover is an indicator of driver empowerment,” the blog post read. “When the job market tightens, drivers find themselves in the driver’s seat (pardon the pun), putting millions of hard-working men and women in charge of their own destinies in a way that they haven’t been in years, if ever.”

All of you pilots now control the hell of your destinies! And maybe for the first time! Is it getting better?

It’s bullshit, of course. All.

“The Truth About Trucking Revenue” is anything but. And it’s a bit sad. While I’m sure its authors – its byline is “ATA staff” – really see it that way, what they wrote reflects something other than the real world of trucking that most drivers live in. It is false in tone and in fact.

Sure, changing jobs can improve a driver’s income and quality of life, but more often than not, it’s not much. Either way, it comes at a cost. Switch carriers and you have to learn about the new company, its customers, routes, policies and all its most important quirks. That’s a lot to learn, and the real learning often only begins after mind-numbing unpaid driver orientation sessions.

Even when a recruiter tells the absolute truth, it’s still the truth as they know it, not necessarily as you’re going to experience it. This may not be the whole truth. Sometimes the new job is more demanding than the one you are leaving. Despite a raise in pay or miles, conditions can be worse and management even harder to deal with. You don’t really know what you’ve gotten yourself into until the first operational glitch, settlement issue, or special request to get home.

Changing carriers is always a gamble, something to weigh carefully, especially when it comes to a family’s livelihood. Big job-hoppers bounce around within the industry, but for most drivers, changing jobs is a big deal.

I’m happy for each driver who tries his luck on a different fleet and it’s going well. This is a good thing. But that happens less often than “The Truth About Trucking Revenue” suggests.

To a deplorable degree, driver churn is a measure of dissatisfaction. Churn is less an indicator of driver empowerment and more of driver desperation.

We are not talking so much about a self-employed workforce as about a sick industry.

But I guess the ATA thinks it’s better for the churn to look good than to admit thousands of people who come into the industry, get a taste of life and paychecks, then exit as soon as that they can.

“While retirements and departures represent only a small percentage of revenue, overall, that’s not what this number matters,” the authors state.

A small percentage? I do not believe that. The DOT secretary said that 300,000 people leave the industry every year, and I doubt that number is high enough. But I can’t be sure because I don’t have access to precise numbers. Only carriers have these numbers, and they don’t always share them – maybe not even with the ATA.

For starters, how many drivers give up each year? How many of this number have been employed for less than a year? Less than six months? How many stayed long enough to collect a login bonus and then took off?

Specifically, how many of these drivers have moved on to other driving jobs? And how do the carriers or the ATA know if a driver is leaving one carrier for another or leaving the industry altogether?

If there are credible explanations and legitimate figures, I would like to know them. Security regulators must certainly be familiar with them.

Security regulators should know some things they don’t. The lack of turnover data is an unrecognized problem, at least in part because it is easier for regulators to manage driver behavior than corporate policies and cultures. But given the huge volume of driver turnover, regulators should investigate its impact on safety. Indeed, the rotation of drivers should be part of the safety profile of each fleet, whether this rotation is a turnover or not.

I said “The Truth About Trucking Revenue” was sad. It’s sad that it appears on the website of a national trucking organization of the stature of the ATA. That means it was probably read and accepted at face value by at least some journalists, members of Congress, and policy makers. It is very sad that the ATA made it clear to them that driver churn is some kind of a good thing.

This is not the case. LL

After injury, it would have taken a wrecking ball to remove Gindorff from Bison football – InForum