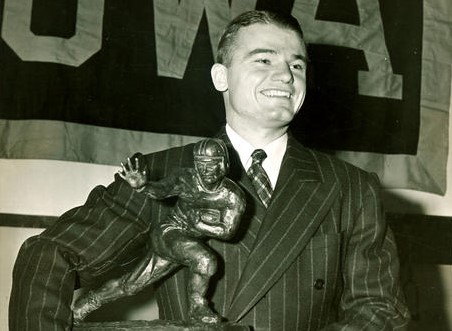 It is, of course, a canyon jump to project greatness onto an unfinished life.

Or a development for that matter.

The mouth of the funnel for leaders, important and distinguished men and women, is wide, and few end up getting out of it, David Shoenbaum, professor of history at the University of Iowa told me many years ago.

That said, it’s impossible to read the diary and letters of the iconic Nile Kinnick and not delve into speculation about what the future might have held for this Heisman Trophy-winning scholar, this grandson of a former governor of Iowa, if he had not died on June 2, 1943, at the age of 24, at the controls of a Navy plane during a training exercise in Venezuela.

Those instincts, historical speculations, came back Wednesday night when I attended the premiere of the gripping 92-minute documentary, “Kinnick,” a film by Goldfinch Films. It was executive produced and narrated by actor and radio and television personality Scott Siepker of Des Moines, a native of Mount Carmel in Carroll County, also known as “The nice guy from Iowa.” The movie is showing The Palms and IMAX theaters in Waukee and other locations in Iowa, and it is available for purchase online via Vimeo.

Siepker and his partners in the project have spent the better part of a decade collecting documents and diaries and interviewing people with ties to Kinnick.

The film is a celebration of a short, bright life – and a painful obituary of lost potential. Kinnick clearly had the character and the strength of mind to support his searing political ambitions — a mix Siepker has seen time and again and again over years of research and filmmaking.

“If he doesn’t die in the practice accident, he still has to go through the Pacific Theater,” Siepker said in an Aug. 24 interview. “If that happens, I really don’t think it’s an exaggeration or hyperbole in any way to say his floor was a US senator from Iowa. And his ceiling is the president of the United States – and to how different this world is if the darling of the Republican Party in 1960 or 1964 or 1968 is not Richard Nixon, but rather Nile Kinnick.

Imagine how Vietnam would have been treated differently, Siepker said.

“I can guarantee we wouldn’t have had Watergate,” Siepker said. “This country and the world really lost a lot when Nile perished.”

By definition, diaries are written for posterity, but Kinnick constantly records his thoughts on paper as if expecting the words to be archived later, perhaps as part of the biographical construction of the library. of a governor or even dare to suggest a presidential center.

In his book, “Bernie Saggau & The Iowa Boys: The Centennial Story of the Iowa High School Athletic Association,” writer Chuck Offenburger takes readers through the rise of one of the nation’s great amateur sporting institutions. The 2-book, a veritable encyclopedia of Iowa sports history, took Offenburger two years to research and write and contains a treasure trove of anecdotes about athletes, coaches and key figures.

Political students and observers of men and women seeking office can easily see that Kinnick’s mind works as an activist even as a young man. He makes it clear that Winston Churchill is a hero. But it’s Kinnick’s tribute to a lesser-known British Prime Minister that sends shivers down the spine.

“By the way, don’t forget to see the movie ‘Young Mr. Pitt’ if you get the chance… Pitt the Younger became Prime Minister of England at 24! Think about it! Kinnick writes in a 1943 letter to friends in Dallas County.

Pitt becomes prime minister at age 24. Kinnick dies at age 24 in the Gulf of Paria. It is absolutely heartbreaking.

The Marion Sentinel went so far as to endorse Kinnick for the presidency in 1956 in 1939.

Hear his Heisman speech, the confident cadence, rich poetry, and unmistakable Midwestern stability, and you won’t laugh at the audacity of hope this little newspaper outside of Cedar Rapids had for Iowan.

I thank God that I waged war on the grids of the Midwest and not on the battlefields of Europe. I can confidently and positively say that players in this country would struggle a lot more and would rather fight to win a Heisman award than a Croix de Guerre.

A Republican by birth

We know for a fact that Kinnick was a Republican and most likely would have run as such had he sought high office in Iowa. (The very patriotic Kinnick supported his commander-in-chief, President Roosevelt, but was critical of some of the Democratic president’s political and national initiatives.)

Kinnick’s maternal grandfather, George Washington Clarke, a Republican, served as governor from 1913 to 1917. Nile Kinnick’s family had the intellectual and educational pedigree of a political dynasty as well as ties to Grinnell College, Northwestern University in Evanston, Illinois, and Drake University.

In 1940, Kinnick appeared with GOP presidential candidate Wendell Willkie at a rally in Iowa Falls. When challenged in a letter by well-meaning Shenandoah physician Erwin Gottsch about the disorder of getting involved in politics, Kinnick revealed a lot about his politics in a response letter.

“I’m a young Republican and I expect him (Willkie) to do good for this country,” Kinnick replied. “I am addressing the young Republican state convention not because I think it will enhance my prestige, but because I am interested in government and have some interest in that direction.”

Kinnick adds, “My grandfather was a Republican governor of this state. He was honest, fearless and knowledgeable.

In 1956, Kinnick would have been 38, and therefore constitutionally eligible for the presidency. Suppose Kinnick followed his grandfather into Iowa politics, perhaps finding his way to Terrace Hill or a seat in Congress (Iowa governors during Kinnick’s window here were all Republicans: Robert D. Blue, William S. Beardsley, Leo Elthon and Leo Hoegh).

Then President Dwight D. Eisenhower, who ran with Richard Nixon as his running mate in 1952, rejected Dick in favor of Kinnick.

Since Ike can’t run for a third term thanks to passing presidential term limits, this sets up a fascinating storyline: John F. Kennedy vs. Nile Kinnick in the 1960 presidential race. Sorry, ladies.

It turns out that in the 1960 presidential race, Kennedy won 34,266,731 votes to Nixon’s 34,108,157 – in a decisive election that saw the first Catholic in the White House and the inauguration of a televised politics in which Nixon, famous for his sweating and grumbling, performed disastrously. . Based on his Heisman Trophy acceptance speech alone — recognized for generations as one of the best delivered — one might reasonably suspect the cameras would have been kinder to Kinnick. His charisma roars on the big screen in “Kinnick.” And his wit and self-deprecating humor rival Kennedy’s. Additionally, he speaks with a dominant Midwestern accent that is strong, clear, and centered. He talks like a senator. Early twenties.

But it’s a leap to extrapolate the future of a young man – albeit an extraordinarily bright and well-spoken one – based on diary entries and conjecture from contemporaries or through the comfort of unprovable historical assumptions.

So in 1960 when Republicans were watching Nixon, Nelson Rockefeller of New York and Barry Goldwater of Arizona, it’s, well, a reach to see Kinnick be in the presidential mix, no matter how much celebrity you assume that Kinnick builds.

But let’s say it is.

What form would the Kennedy-Kinnick race have taken? To get into specific questions would require some kind of time lag between diary entries and letters from the 1940s and politics 20 years later – freezing a young man in the uncertainty of World War II and overtaking two decades experiences that Kinnick never had.

It is reasonable to say that Kinnick, a Christian Scientist, would not have been a pacifist, even though his 1939 Heisman speech alludes to Charles Lindbergh-like isolationism.

“Whatever happens,” he said in a 1943 letter, “if the United States ever allows any country to overrun its air and sea forces, it’s a fool. Frankly, I don’t believe in this disarmament stuff any more than I am in favor of canceling my insurance when I stop flying.

And there are signs that Kinnick was a man of limited government.

“In my mind, any extension of government control in this country is particularly bad for the simple reason that we as a people are not yet proud of government positions,” Kinnick said, according to his personal writings in the book. 1991, “A Hero Has Perished”, brilliantly edited by Paul Baender and published by University of Iowa Press.

The late Iowa icon might as well speak for frustrated contemporary Republicans when he breaks this line in a letter: “The Republican Party drives me so crazy I almost give up. If they got together, they could oust the New Deal next time.

Ultimately, speculating about Kinnick’s political potential leaves those who do (especially Iowans who can spot one of Hawkeye State’s best) with a deep sense of sadness.

“There’s so much going for him,” Siepker said. “Even though we left a lot of stuff on the cutting room floor for entertainment, attention purposes, you still walk away feeling that Nile is someone we can all look up to.”

This column was originally published by Douglas Burns’ blog, “iowa mercury” and is shared here through the Iowa Writers Collaboration.