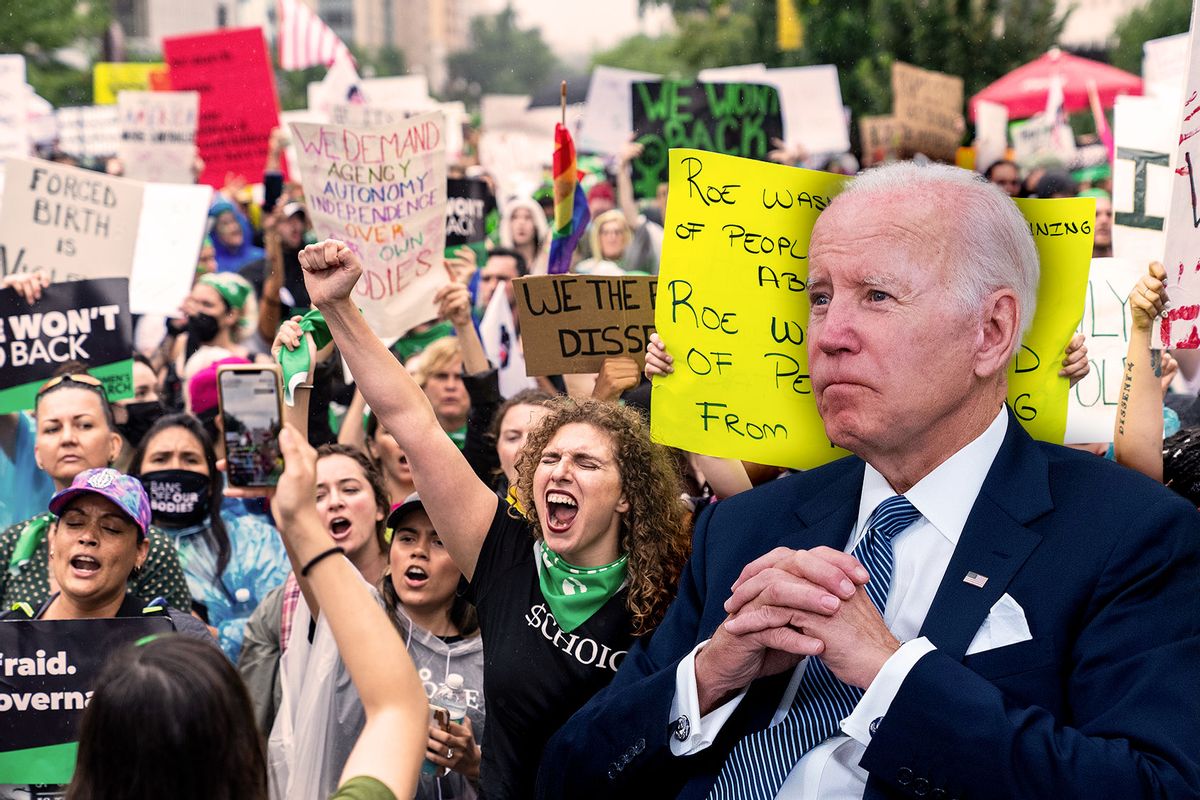 Roe’s fall has energized the left: will it now wake up the Democrats?

On July 8, President Biden signed an executive order directing the Department of Health and Human Services (HHS) to take action to protect and expand access to medical abortion and contraception while ensuring patients are eligible for get emergency care. In addition, the order seeks to ward off threats posed by surveillance in states prohibiting abortion by directing federal agencies to take additional steps to protect patient privacy.

It is important to understand that this order came in response to a two-week pressure campaign by leftists who were frustrated by the Democratic Party’s lukewarm response to the Supreme Court’s decision in Dobbs v. Jackson Women’s Health Organization, which overturned the 1973 Roe v. Wade decision decision protecting the right to abortion. Some progressive activists, as well as ordinary voters, have threatened not to fund or vote for the Democratic Party and its candidates unless leaders act.

How that pressure moved Biden from inaction to an executive order illustrates what militant scholars like the historian Howard Zinn long argued: You cannot be neutral on a moving train, and change only comes through sustained citizen protest and agitation. In effect, Lawrence O’Donnell explained that when he worked for the Democratic Party, he generally ignored demands from the left because few progressives were actually willing to withhold their votes on Election Day, ultimately succumbing to the party’s ongoing “vote blue, no matter who”. As Biden’s recent executive order illustrates, those seeking to codify the right to abortion must agitate and annoy Democratic leaders into taking aggressive action.

Concrete example, even if the Dobbs Decision leaked weeks in advance, Biden apparently had no plan to protect abortion rights after his final announcement. Meanwhile, Republicans had been planning years ahead, spending what is called trigger laws which automatically banned abortion in states once deer was overthrown. The Democratic Party’s response was limited to House Speaker Nancy Pelosi reading a poemvice president Kamala Harris tweeting a photo of her watching pro-choice protests, Democratic members of Congress chanting “God bless America“on the steps of the United States Capitol, a vast Fund raising campaign, and reproaching the electorate for not “vote louderfor the Democrats – the party that made it all happen.

Through podcastsopinion pieces, street protests and more, progressives and leftists have rallied to pressure the Democratic Party to stop dithering on abortion rights and take substantive action, including removing the filibuster, filling the court or by adding abortion clinics on federal lands in or near states that prohibited abortion. They chastised the Democratic Party in general and Biden in particular for serving as catalysts for the Republicans’ anti-abortion agenda. In response, Democratic Party apologists have taken to social media to hijack and blame Supporters of Bernie Sanders, Susan Sarandon and other so-called far-left types for overthrowing Hillary Clinton’s 2016 campaign, which they say paved the way for Trump to nominate three justices of the Supreme Court who were integral to the overthrow of Roe. Somewhat surprisingly, however, these self-righteous social media users were overwhelmed by dozens other mainstream Democrats, who have largely echoed criticism from the left.

These included celebrities such as Debra Messing and “two dozen leading Democratic politicians and operatives, as well as several within the West Wing. They complained that they were being asked to do more fundraising and voting, while the Democratic Party — which controls both the executive and legislative branches in Washington, at least nominally — balked at the right to vote. abortion. interrogates if Biden was able to act. Some “mocked the way the President stood in the White House lobby, squinting through his teleprompter remarks as protesters poured into the streets, making only vague promises of action because he and his assistants had decided no more”.

Want a daily recap of all the news and commentary Salon has to offer? Subscribe to our morning newsletter, Crash Course.

Those protesting on the left hoped to demonstrate that any fundraising or election campaign would be pointless until they had a little more faith in Joe Biden as an agent of change. It was certainly hard to imagine, given that as a candidate in 2020, Biden promised wealthy donors that if elected, “nothing would fundamentally change.” These criticisms, however, seemed to increase the pressure on Biden and his party. Following the Dobbs decision, Biden reportedly reached an agreement with Mitch McConnell to appoint a anti-abortion federal judge in Kentucky. But as pressure from progressives mounted, the president rhetoric became more aggressive when he expressed his desire to remove the filibuster to codify the right to abortion. Some reviews have already maintained that the decree was too little too late. Whether Biden has now been moved to more serious action, only time will tell.

This shift in rhetoric has done little to quell the protests or bolster Biden’s polling numbers. Since his election, Americans trust in the office of the presidency in general fell 15 points, from 38% in 2021 to 23% in 2022 – two points less than even the Supreme Court. Additionally, Biden’s approval rating – 36% on July 6 — was just two points above Trump’s dismal 34% when he left office. Currently, some 64% of Democrats don’t want Biden to run for a second term.

The Democratic Party will never face its massive failure, nor give progressive activists credit for forcing it to move. But the real question is whether he is ready to change.

Elites never admit failure. The Democratic Party will cover up but never confront its massive failure to protect far-right and GOP abortion rights. As a possible or probable defeat awaits Biden’s party this fall midterm, Democrats will continue to blame the other party or their own constituents, but never themselves, for promoting candidates and policies that do not won’t keep them in power. This was already demonstrated in a CBS News interview on July 10, when Vice President Harris claims that the Democrats were not responsible for overthrowing Roe because they “correctly believed” that abortion rights were a matter of settled law. That’s rich coming from someone who served in the US Senate with colleagues who openly appointed anti-abortion judges and repeatedly argued for the overturning of Roe v. wade.

Nor will the Democratic leadership ever give progressive activists credit for forcing the party to try to protect abortion rights. Their disdain for progressives was shown by their efforts to undermine both presidential campaigns and remove all funding for Nevada Democratic Party after a list of Democratic Socialists was elected to head the state party. These efforts seem to communicate that it is worth risking Republican victory in order to purge progressive activists.

It’s no surprise that the White House communications director Kate Bedingfield said Biden’s recent actions “would not satisfy some activists who have always been out of step with the mainstream of the Democratic Party.” But this analysis is simply not true. While progressive activists may not align themselves with the neoliberal business leaders of the DNC, they are hardly out of step with the “mainstream,” given that 60% of the entire electorate and 80% Democratic voters and “leaners” share the goal of protecting the right to abortion. Joe Biden’s July 8 executive order does not replace codified abortion rights, but it illustrates that sustained protest against those in power is the most effective way to bring about change. More protests and pressure, likely over a period of years, will be needed to pass legislation that codifies abortion rights across the country.

Going forward, the Democratic Party can (and likely will continue) to berate activists to distract from its own failures, but the reality is that activists push the party into action and should be embraced. There is still a long way to go, but this should serve as a lesson to those who support abortion rights or any other civil or human rights policy: to make a difference, voting and hoping are never enough. Rather than attacking the left, Democratic voters should hold those in power accountable to their base and a majority of Americans. As early 20th century labor activist and songwriter Joe Hill once said in the face of defeat: Don’t cry, organize. So wave like hell for real change. Democracy is not a spectator sport.

on the Democrats and the fall of Roe

A simple formula to get your IT security budget approved