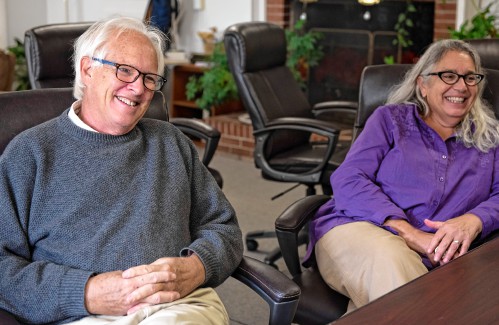 NORTHAMPTON – Peter Pollard was a reporter for the Daily Hampshire Gazette in 1987 when he covered a tragedy in which a 2½-year-old Plainfield girl lay in a coma in an emergency room, allegedly injured at the hands of her abusive father .

This man, who lived in a trailer, had lived in foster homes and had been adopted, and the unfortunate outcome for his own child, says Pollard, could come from the sexual abuse he suffered with foster families .

“It allowed me to look at my own experiences of childhood sexual abuse and helped me understand that we as a community had let this guy down as he was growing up,” says Pollard, who has been the victim of a Catholic priest. “We were collectively responsible for what happened to her 2½ year old daughter.”

In the 35 years since he worked on this story, Pollard has focused on methods of preventing child sexual abuse, not conventionally, but rather aligning his work with the mission of Stop It Now!, based in Northampton. organization focused on getting potential perpetrators the help they need before abuse happens.

Former director of public education for Stop It Now!, Pollard praises the organization for its goal of preventing child sexual abuse and giving individuals and families the groundwork and resources needed so perpetrators can understand that are not monsters and can lead productive lives.

Pollard, of Amherst, last week received the top Founders Award from Stop It Now! Executive Director Jenny Coleman, both for her previous work with the organization and her ongoing advocacy, including as a member of its advisory board.

“Peter struck us as someone who has both courage and the ability to speak to people in a non-alarming way about real-life experiences,” Coleman said.

Pollard’s work has included being regional coordinator for the Survivors Network of those who have been abused by priests, director of communications for 1in6 Inc., which provides support and information to male survivors of sexual abuse and assault, and Visiting Researcher at the Office for Victims of Crime. in Washington, DC, focused on abused young men of color.

Pollard was also able to show both sides of the issues and put everyone at ease. “His voice is one of reason, hope and action,” Coleman said.

The prize comes as Stop It Now! celebrates its 30th anniversary with a 90-minute virtual recognition ceremony. This event includes the presentation of the award, testimonials for those who fight against sexual abuse and interviews with those who contributed to its success. Broadcast via its website, the show remains available for the public to watch online.

Coleman, a director for six years and a member of the organization for a decade, said Stop It Now! has gained momentum nationally and internationally, it remains focused on preventing child sexual abuse by creating pathways of hope, compassion and respect for people to seek counseling and treatment.

Stop now! Founder Fran Henry, Coleman said, moved conversations that often blame kids, like right and wrong touch, to ones where perpetrators would ask for help, if only the resources were available.

“Fran helped shift the conversation to what adults could do, how can we build protective family advocacy, and what will affect behavior change,” Coleman said.

In the birthday program segments, Henry said she knew of people who might ask for help, but had nowhere to turn, and designed the program to provide them with help. . As it grew, expanding into a public health lens, Stop It Now! examine harmful behaviors and how to change them.

The best known Stop It Now! is the helpline that offers advice, training and education and other ways to reduce isolation.

“It’s so much about preventing child abuse and being able to support each other,” Coleman said.

For 15 years, Pollard worked for the state Department of Social Services, where he noticed people were overwhelmed with cases. “They had never been given the tools to behave in a protective manner,” Pollard said.

In 2002, he became active in the network of survivors of those abused by priests.

Pollard then went to graduate school, being part of the Stop It Now! From 2005 to 2008. He was allowed to speak openly about being sexually abused as a child.

He oversaw the helpline, noting that the hardest part is that people want to demonize those with impulses to commit wrongdoing.

“The tendency to demonize them is harmful because it can prevent them from getting the help they need,” Pollard said.

He has also written content for blogs and edited materials for Stop It Now!

Pollar spent years with ServiceNet focusing on domestic violence, such as sexual abuse. “Every type of harm and violence has a foundation in trauma,” Pollard said.

Coleman said the organizations aim to reach new people, with the launch of whatsok.org, which will target people aged 14 to 21, those struggling with the behavior of their loved ones and themselves. themselves. It’s a safe place where they can ask questions and get help, and that’s part of the focus on prevention.

The abuse he suffered at the hands of a priest allowed Pollard to understand the situation of others and maintain his commitment to ending child sexual abuse.

“I wouldn’t be who I am today if I hadn’t learned from that experience and been able to heal,” Pollard said.

Scott Merzbach can be contacted at [email protected]