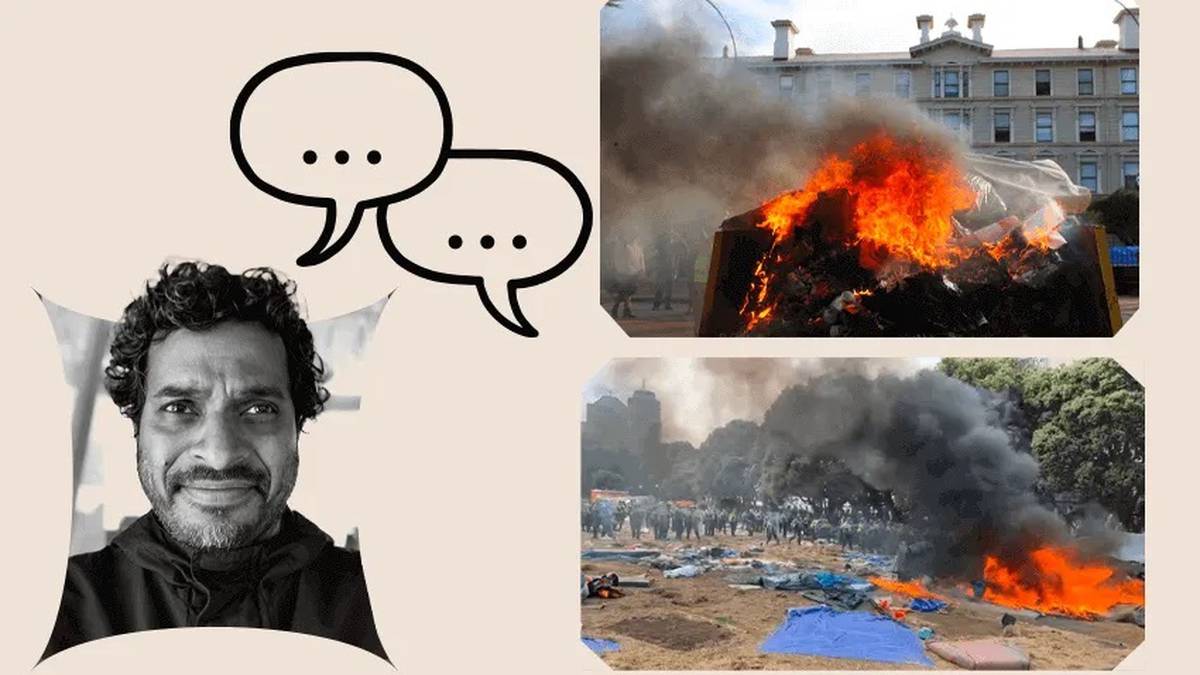 The fallout: Protest lost in Parliament – ​​but unequivocally won the social media war

Protesters set fires on the grounds of Parliament and threw bricks and other objects as police moved into the occupation site on Wednesday. Video / Michael Neilson

Originally posted by The spin-off

A University of Otago researcher has watched with awe as misinformation overwhelms mainstream truth-based channels on social media.

Sanjana Hattotuwa tells the story of growing up in a country at war, near an airport in Sri Lanka which was a key passage between the capital of Colombo and the northern front. Every day the government-controlled press reported good news about the progress of the war; every night he was kept awake by the sound of turboprop planes ferrying injured people back to city hospitals.

This dissonance between reality and the official narrative shaped around it became a lifelong obsession and then a life’s work. His background places him perfectly placed to examine what we now call information disorder – the growing disconnect between objective reality and a growing group engaged in increasingly extreme conspiratorial thinking.

Hattotuwa created Groundviews, a civic media site for Sri Lanka, and worked alongside giants of the era’s battle for truth, including Maria Ressa, the Filipino journalist who won the Nobel Prize for the peace. He recently completed doctoral studies on “the intersection of social media, political communication and the generation of violence” at the University of Otago and now works within Te Punaha Matatini probing the same territory.

We live in an era characterized by a phenomenal volume of public and private communication happening simultaneously, with a tiny number of platforms hosting and monetizing a huge share of it. It’s both accessible to almost anyone, but also maddeningly opaque, with private groups and algorithms that surface content for different audiences, meaning no one can ever get a true sense of what what is someone else’s media consumption.

Aotearoa has long had a highly regulated mass media, and this controlled and authorized era is within living memory for half of our population. That’s part of what makes it so shocking to see the thousands of people who have gone from a shared reality to a mess of conspiracy theories that culminated in the extraordinary scenes in Parliament last week. As Toby Manhire put it onwe saw a “reel of scenes that seemed to come from a distant place, projected against the backdrop of our Parliament”.

Yet while it was a confronting break for many, for Hattotuwa it was – while still shockingly – also essentially predictable. He had been following the growing uproar of the occupation on social media for weeks and experienced the events of last Wednesday through a deluge of social media communications.

I spoke to Hattotuwa on Thursday for my podcast The Fold, which gives an overview of Aotearoa’s media landscape on a weekly basis. He was passionate and thrillingly articulate in cataloging what he had seen, and the dramatic escalation in scope and impact that led directly to the growth of the occupation. For so long, politicians and institutions have felt that what happens online is somehow lesser and abstract, with only a very limited impact on the real world. Putting aside the idea that things happening online are less real to many, we saw very viscerally last week that radicalization online leads directly to real behaviors.

The Prime Minister seemed to acknowledge that the period of largely libertarian social media authorization was over during her press conference that day, when she suggested that the time would come when we had to understand how so many people could “succumb to such savage and dangerous behavior. misinformation and disinformation.” The fact is, it’s no mystery: Hattotuwa has shown that live videos of the occupation have grown at an unprecedented rate, surpassing the reach of all mainstream media by several times and for long periods of time.

Limit tweets to help explain the splintered realities of Facebook pages and Instagram data — all from public accounts. On February 10, the producers of mis/disinfo on Facebook equaled, or with some measure, surpassed, ALL mainstream media FB pages in New Zealand. Unprecedented, astonishing & disturbing. pic.twitter.com/DcAalE2A4m

He gives data to back up what many of us in the media had seen through social analytics in recent weeks – any content about the occupation has garnered incredible engagement. And posts that expressed support or contempt for politicians and journalists exploded. For example, a February 22 article by former Act party leader Rodney Hide under the headline ‘the protesters won’, posted on Sean Plunket’s new website, The Platform, drew more than 5,000 interactions on Facebook, although the company didn’t has not been officially launched. To put that into context, that’s more interactions than all of the more than 200 Facebook posts by Newsroom – which has extensively covered the protest’s disinformation complex in superb fashion – during this week, combined.

All of this still pales in comparison to the protest’s two main means of communication: Telegram and Facebook live, which Hattotuwa took a closer look at. He says “there was greater volume, there was greater velocity, which is velocity and there was more diversity in vectors, which are platforms. It’s volume, vector and speed. Then there’s also another way of looking at it which is in terms of speed and range and scale. So this was an accelerated production of violating detrimental material, and they have a wider audience who it was addressed to.

While engaging with content isn’t the same as approving or believing it, Wednesday’s events show how powerful it was for some and how ineffective any attempt to contain it has been. Hattotuwa has engaged with Facebook at the enterprise level for years and believes that while there are many genuine and talented people working to try to solve this devilishly complex problem, they are unable to effect change. – the parts of the business that generate growth and revenue are just too powerful.

That is, change seems extremely unlikely to come from within. There is a growing political movement around the world that is determined to tackle this pernicious challenge with regulation. The events of the past week, and the Prime Minister’s new tone in response, have given the impression that there may finally be progress on this front here. For Hattotuwa, attention and emphasis are overdue, but welcome.

Directors blast decision to remove categories from Oscars live stream: ‘It was a mistake’

It is still legal to rape your wife in India. This might be about to change