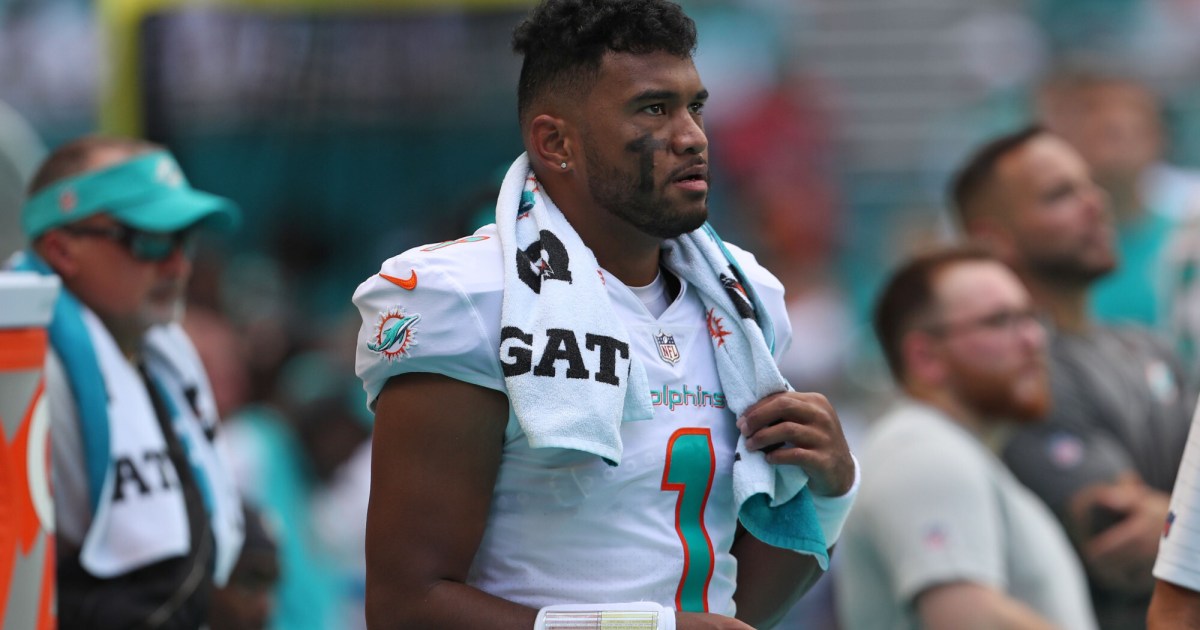 The NFL is what we thought it was – Mother Jones

Fight against misinformation: Register for free Mother Jones Daily newsletter and follow the news that matters.

Last Sunday, Dolphins quarterback Tua Tagovailoa was forced out of the game in the second quarter of Miami’s game with the Buffalo Bills after what looked like a serious blow to the head to anyone watching. Tagovailoa appeared to slam his helmet on the turf after being knocked down by a defensive player, stood up, then wobbled and fell back to his knees.

But Tagovailoa didn’t stay out of the game very long. According to Dolphins head coach Mike McDaniel, he was rated by “several layers of medical professionals” for any signs of a head injury, cleared to leave and eventually finished the game.

And then, Thursday night, it happened:

Prayers for Tua. He just got kicked off the pitch 🙏 pic.twitter.com/HPv03iqWMU

He’s a 24-year-old man who loses control of his arms and hands on national television in what’s been called a ‘fencing’ – a horrifying symptom of severe concussions that football fans have learned about. existence in recent years as the extent of the NFL’s concussion problem, long covered up by the league, has come to light. Tagovailoa did not return to action after that. He was taken to hospital and evaluated for head and neck injuries, then, according The Dolphins beat journalist Marcel Louis-Jacques, Tagovailoa sat next to McDaniel on the flight back to Florida and laughed at the film MacGruber with his trainer.

But we don’t laugh much about the situation in the world of football. In response to the MacGruber revelation, former NFL player Will Blackmon share that he had been ordered not to use his phone after his own concussion. Avoiding screens is common advice; so it is to avoid planes.

Another NFL retiree, Rob Ninkovich, said on ESPN that the league and the team “should be sick to their stomachs” over how Tagovailoa’s injuries were handled.

“They’re supposed to be there to protect the player against the player getting injured,” he said. Whether Tagovailoa thought it was good to return to the game on Sunday or to start the game on Thursday should have been irrelevant.

Rep. Bill Pascrell (D-NJ), the founder of the Congressional Brain Injury Task Force, wrote to NFL Commissioner Roger Goodell and Dolphins owner Stephen Ross demanding a fuller account of how Tagovailoa’s injuries were handled. The NFL Players Association had already demanded an investigation into the Dolphins before Thursday’s game even started.

Saturday, ESPN reported that an “unaffiliated neurotrauma consultant” who signed Tagovailoa back to the field was fired at the request of the NFLPA, after an investigation found he had made “several errors”.

McDaniel, for his part, insisted the team did everything right and that he and his staff would never knowingly do anything to jeopardize a player’s health. Consultant aside, it’s worth considering the implication of those words and what it means for the whole process the NFL has built. Like Mina Kimes Put the on Sports Center, “It’s entirely possible the Dolphins didn’t break the rules, but the rules themselves are being broken.”

The Dolphins head coach is just human, and I have no doubt that he wants the young man he works closely with to be well. But it’s that desire for everything to always go well, to move forward rather than pause and reassess – and the financial and professional urgency and pressure to manifest that in a crucible of 17 games – who brought the NFL to where it is today.