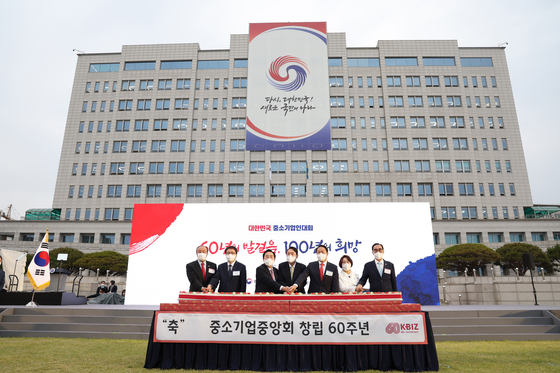 The presidential office is almost complete, and it takes on a new name

President Yoon Suk-yeol attends an event celebrating small and medium-sized businesses on the lawn in front of the presidential office in Yongsan district, central Seoul on May 25. [NEWS1]

The new nickname and emblem for the presidential office will be unveiled on moving day.

Since launching his administration on May 10, Yoon has worked from a temporary office on the fifth floor of the Ministry of Defense building in Yongsan. Renovations throughout the 10-story building are underway, and Yoon will move to the second floor, her permanent office, as soon as it’s finished around June 19 or 20.

The second floor will also house the office of Yoon’s chief of staff, small and large reception rooms and some security services. The third floor will be occupied by the president’s principal secretaries, and the other floors will be used by the presidential security service, the secretariat, other aides and a new public-private committee. The press center is located on the first floor.

The fifth-floor office, where Yoon’s summit with US President Joe Biden was held on May 21, will be transformed into a multi-purpose function room.

First lady Kim Keon-hee could also use the reception hall on the fifth floor, the presidential office said, but not exclusively.

A senior presidential official told reporters on Sunday, “The temporary office on the fifth floor will be used as a second office and reception hall for distinguished guests, and it can also be used for first lady Kim Keon-hee’s public activities. .”

Kim has generally remained out of public view except for major events, including Yoon’s inauguration and a Memorial Day ceremony on Monday. Last December, she issued a public apology for allegations that she falsified her career credentials in resumes when applying for college jobs and said after Yoon was elected president in March that she planned to discreetly help her husband.

The official presidential residence, the former foreign minister’s residence in Hannam-dong, Yongsan, is also being renovated and is expected to be completed by the end of this month. Yoon commutes from his private residence in Seocho-dong, southern Seoul.

The presidential office will also soon unveil its new name, a subject of public curiosity for weeks.

People can vote from a shortlist of five candidates announced by the presidential office nominating committee last week in an online survey that runs through Thursday. They were selected from more than 30,000 applications.

Choices include “People’s House,” a name Yoon previously mentioned as a possibility. The name signifies that the “presidential office is a place open to all, where the people own,” according to the nominating committee.

Another candidate is “Itaewon-ro 22”, a simple reference to the address of the presidential compound to mean “true communication with the people using the street name address used by all citizens”.

The other three possibilities are “Gukmin Cheongsa” (People’s Government Office), “Mineum Cheongsa” meaning “listen to the voice of the public”, and “Bareunnuri”, which translates to “fair world”.

Since the launch of the online poll last Friday, more than 22,500 people have voted on Tuesday afternoon at https://www.epeople.go.kr/idea/.