The government is currently trying to devise solutions that could solve the social and economic problems associated with Japan’s aging population. Despite the increase in metropolitan areas, long-term projections do not inspire optimism. As a company active in the real estate sector, Apaman has proactively contributed to solving Japan’s demographic problems.

In terms of business, I think the population will go down for a while. However, there are about 130,000 real estate companies now, so the oligopoly is not over yet, and I think APAMAN’s business is not a problem, but I think the number of small and medium real estate agencies will inevitably decline.

Your company makes heavy use of cloud technology and AI for its real estate needs. How do you envisage the impact of digital technologies on the real estate sector in ten to fifteen years?

Real estate is an information industry, so I think it’s the most suitable industry for IT because it doesn’t manufacture anything. I believe over 90% of what we do now will be automated. As automation, convenience, and expediency improve everywhere, there will be businesses to pursue this. I think we will be competing not only with domestic companies, but also with foreign companies. I believe that in some ways we will not only be competitive, but also collaborative.

There are many systems that we have developed together with SystemSoft to meet this need. Then, regarding cooperation with foreign companies, I am now a member of the advisory board of Docusign which is based in the United States. This is due to the fact that I was good friends with Keith Kutch, the former president of Docusign. We partnered with this American company in the field of electronic signatures and extended it to Japan. We also provide products that we developed ourselves because I think speed is important.

How does APAMAN contribute to the development of Smart Cities?

I think smart cities are Japan’s forte. China and the United States are more advanced when it comes to individual products, but I think Japan excels when it comes to using and integrating the whole. Toyota Motor Corporation’s Smart City and Fukuoka City initiatives are well known in Japan, and Japan is also good at using a variety of computer technologies to move entire cities, and we also cooperate with the government.

APAMAN runs coworking spaces called fabbit and WeWork, both aimed at supporting small businesses and startups. What is your strategy for further developing these activities?

We have organized about a thousand networking events per year so far, so that innovation can come from mutual communication. In that sense, it’s like WeWork, but how much rent we get or anything like that makes almost no sense; we are here to study and communicate. To give you an example, the US government and fabbit recently funded the creation of such an ecosystem for a kind of school in Hawaii.

We don’t care much about the number of locations, but we plan to create around 500 locations worldwide. In Japan, about half of them are built with local governments. 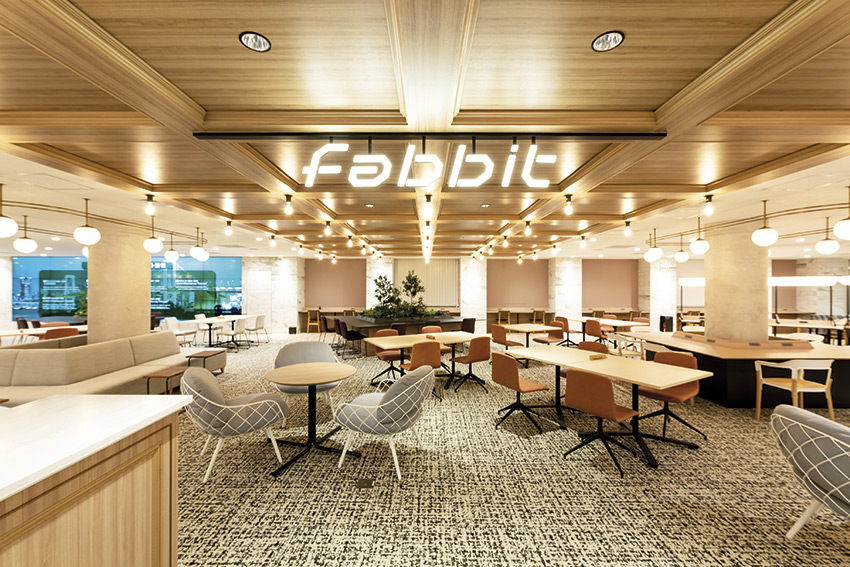 Entrance to the Fabbit in Otemachi, Tokyo’s business center 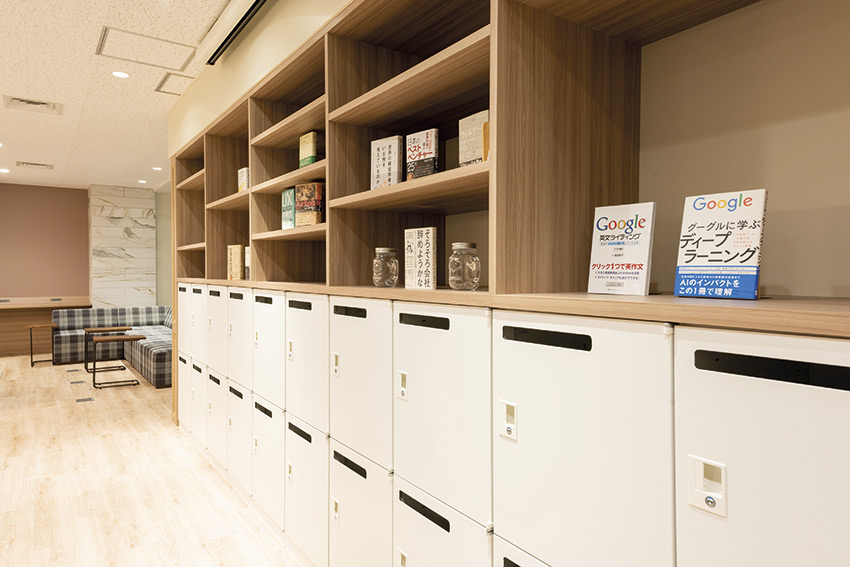 Lockers are available with additional options. Users are also free to read books on establishment and management 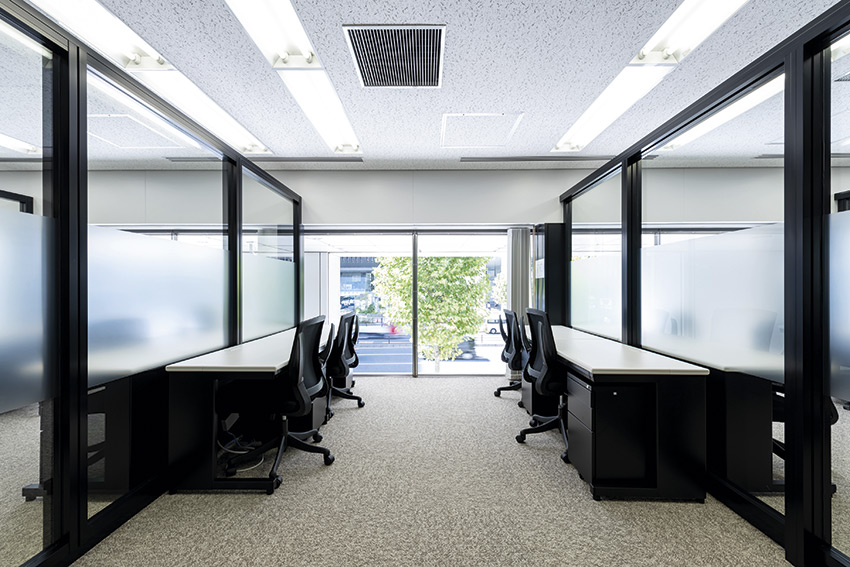 A calm and simple interior, with large bay windows

Can you tell us about APAMAN’s story?

The premise is that real estate = IT in my mind. In short, I believe IT will dominate the real estate industry and the winner will be decided. I was also an IT planner, so I’m half real estate and half IT.

It took me a long time to create my own system, so I changed the signage of a large local business. At that time, I was supplying computer systems and the first system was made by me. Recruit was our rival at the time, but we were ahead of them in IT and became the real estate company with the most stores in Japan. 70% of my time per day is devoted to computing. We grew up winning with IT.

With franchisees in China, Taiwan, Malaysia and the Philippines, how do you ensure that the quality of your service is respected in all your franchises?

Overseas, regulations and ways of thinking are different, so I think it will be difficult to customize the system. Among the systems, I think there are some commonalities, but I don’t think all of them are common. This is an issue for the future. The president of Zillow in the US gave a talk to fabbit the other day, and his conclusion was that it’s very difficult to use the system in different countries. However, for example, we believe that the fabbit system can also be used in the United States and Japan.

Buildings consume 40% of the world’s energy and account for up to 30% of energy-related costs worldwide. How do you provide cheap electricity to your customers and what other services are able to provide them?

Apaman’s energy business has just started and is not yet significant, but we are in the process of expanding it into housing-related services. Some of those services are insurance, warranties, and energy, and we would like to keep those.

APAMAN is a diverse group. In addition to your franchise for real estate agents, APAMAN also provides IT services, cloud services, sharing economy and recently an energy business. How do you manage to create synergies between the different business segments in which you operate?

In a customer survey, we found two years ago that the most important thing they want is one-stop service, the total cost will be lower, and it is easy to understand and see. We diversify based on these keywords. However, when we talk about diversification, we are not thinking of buying power, but rather of providing a platform that we can use and then doing whatever we can within that platform. We think it’s important to say that we won’t do everything, but we won’t abandon the platform.

It will take time. For example, 80 to 90‰ of the properties we manage are insured by us. It took a long time, but we have a guarantor, and about 80-90% of guarantors also use our insurance. We haven’t received that much electricity yet, but we hope to increase the percentage to 40-50% in the future, and we would like to do the same for our lifestyle services.

With the COVID-19 situation, the office market in Japan has taken a hit, as the Type A office vacancy rates in Tokyo have dropped significantly. What is your forecast for the Japanese office market?

The occupancy rate is difficult; we expect about 10% vacancy. I think the number of companies that don’t need office space is growing, including all over the world. fabbit is a flexible office, I think the impact will be minimal, but for large real estate companies, occupancy will go down and rents will go down, so I think profits will go down significantly.

By far the most famous cities are Kyoto and Fukuoka, but Fukuoka has Itoshima next door, which has a large number of foreigners. Fukuoka is a city where there are places for foreigners. I think we have to work on this kind of development. We must make preparations for foreigners to live in our city.

What were the main reasons for Apaman’s success?

I think it’s computer and social. I am currently pursuing two things. First, I would like to expand the real estate infrastructure and increase the number of houses we manage. We have the largest number of stores in Japan, but our property management business is not very large, so we would like to raise it to the largest in Japan. Another thing is that the Japanese government has said that the declining birth rate and technology are critical factors for the nation. We would like to develop fabbit to create technology. I think the relationship between the United States and Japan is particularly important, so we want to make sure that startups can do business in the United States and that American companies can be incorporated in Japan.

As I mentioned earlier, I would like to take over the real estate industry by expanding the platform and providing excellent customer services, and I would also like to use fabbit to create more innovation so that Japan can develop. By the way, after I take office, I would like to go to a university in the United States.

The Rise of Kombucha: How It’s Made

IT Systems Administrator – Senior IT Specialist, UCD job with UNIVERSITY…