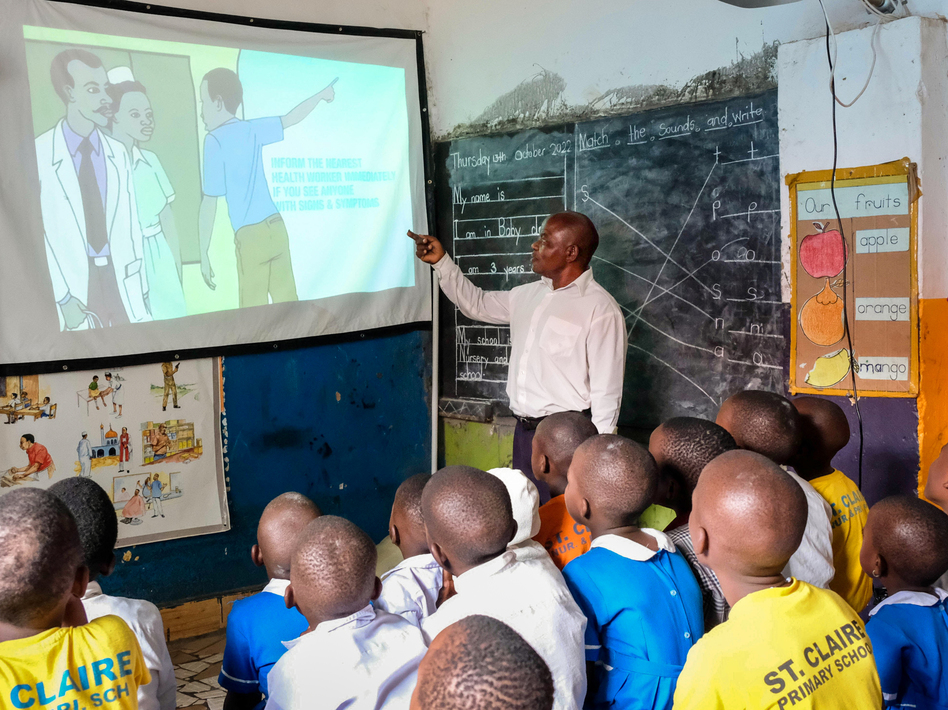 Uganda’s Ministry of Education and Sports has ordered schools across the country to end the school year early to prevent the spread of Ebola among schoolchildren.

Uganda declared an Ebola outbreak on September 20 this year and has since reported 135 cases and 53 deaths from the disease in seven districts across the country.

Of these cases, 23 children were infected and eight died.

The growing outbreak has prompted Uganda’s education minister and first lady, Janet Kataha Museveni, to shorten the third and final school term of the year by two weeks, which now officially ends on November 25.

“Closing schools earlier will reduce hotspots where children come into daily close contact with other children, teachers and other staff who could potentially spread the virus,” Museveni said in a statement according to sources. information.

School closures have been suggested earlier this month by Uganda’s Minister of Health Dr Jane Ruth Aceng, but was initially met with a refusal by the Uganda National Union of Teachers.

The shortening of the school year follows an unprecedented two-year school closure due to the COVID-19 pandemic, which has had a significant impact on the learning of schoolchildren across the country.

Ebola is one of the deadliest infectious diseases on the planet. Infection leads to hemorrhagic fever and death rates from the disease are on average about 50%, according to the World Health Organization. The mortality rate for this epidemic in Uganda is closer to 30%.

Almost all Ebola outbreaks have occurred in Africa, and transmission of the virus usually occurs when a person comes into contact with the bodily fluids of another infected person.

The current spread of the virus is forcing government officials, emergency responders and healthcare workers to prepare for the worst.

Much of this alarm is related to where the virus has spread. “The signs are worrying. The epidemic has now spread to a large metropolitan community, and that’s not a good thing,” says Mark Feinberg, CEO of the International AIDS Vaccine Initiative (IAVI).

This current outbreak of Ebola in Uganda is a little different from most previous outbreaks. It is caused by another species of Ebola, Ebola from Sudan, for which there is no approved vaccine. Most previous outbreaks have been caused by Ebola virus from Zairefor which an effective vaccine was developed in 2018. This vaccine will not work in this epidemic.

Three experimental vaccines for Ebola from Sudan are under development and could be used in Uganda, but have not yet been tested in an outbreak scenario. Among these vaccines, one was developed by Oxford, another by the Sabin Institute and the third by IAVI and manufactured by Merck.

Recent reports have indicated that 100,000 doses of the IAVI and Merck vaccine are being released in Uganda for clinical trials. However, this vaccine exists in bulk and must be divided into doses before it can be used.

Although the effectiveness of vaccines has not yet been tested in humans, it is certain that they will be effective. “The diseases are similar, the vaccines are similar, we expect the performance to be similar, but obviously we still have to prove it,” Feinberg says of the IAVI-developed vaccine.

The The WHO issued a statement on November 3 outlining its plans to begin clinical trials of candidate vaccines. The Lung Institute at Makerere University in Kampala, Uganda, will conduct the trials with support from WHO, CEPIand GAVI.

Vaccines may not be needed for this outbreak

However, there is hope that these clinical trials will not be necessary. Feinberg says, “the best-case scenario here is that the outbreak will be contained by public health measures and there won’t actually be an opportunity to test vaccine effectiveness.”

Janssens backed up that statement, saying Doctors Without Borders has “huge experience in responding to Ebola outbreaks, even when there is no vaccine available.”

It wasn’t until the end of a 2018 outbreak of Ebola virus from Zaire in the Democratic Republic of the Congo that vaccines against this type of Ebola have become available. “For us, [the lack of vaccines] didn’t bring any change to how we react,” says Janssens.

This response includes public health measures instituted by the Ministry of Health, including lockdowns, travel restrictions for close contacts of infected people, and training of village health workers in risk communication and engagement. community.

The recently announced school closures are another of the public health measures being implemented, particularly to prevent the spread among children and school staff.

Despite high death rates, all is not lost for those infected. Many are recovering, including Matthew, 7 months, and his mother.

Janssens described how the mother-son duo was able to successfully recover through treatment. “His mother was the first to be confirmed [with an Ebola infection]”, she said. “Matthew was confirmed a few days later, but both were released.”

Treatment for infected people includes intravenous fluids, drugs, and monoclonal antibodies. Proper diagnosis and treatment during the early stages of an infection leads to the most positive results.

Recovery stories, like those of Matthew and his mother, explain why emergency responders like Janssens put themselves in harm’s way to help make a difference. “That’s also why we do it. Seeing mom’s big smile and just the fact that Matthew was so hungry and moving. I mean, those are all good signs of a healthy newborn baby. 7 months, right?” she says.

“They were so happy to be able to go home. I’m very grateful to them.”