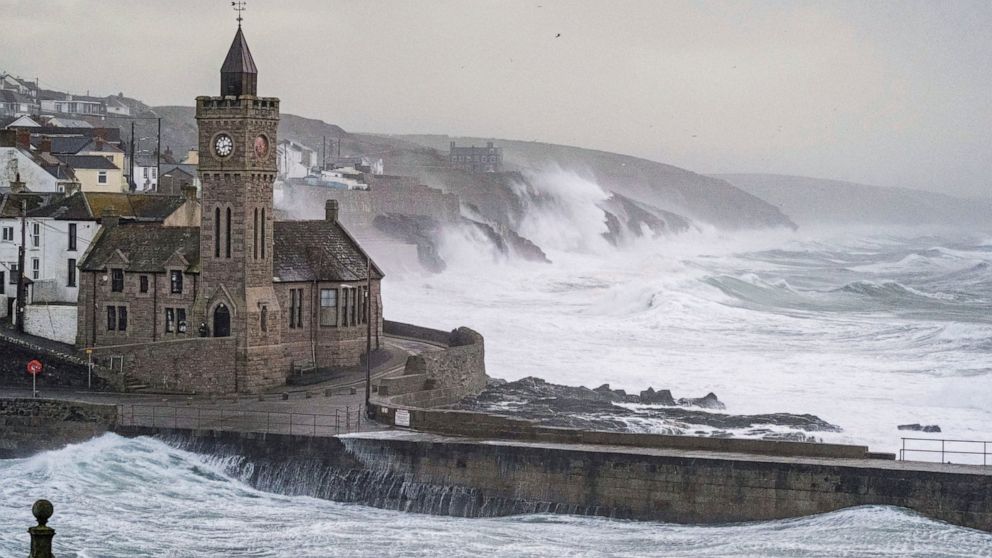 LONDON – Millions of people in the UK were urged to cancel travel plans and stay indoors on Friday as this week’s second major storm triggered warnings of high winds and flying debris in the north from Europe.

The UK Met Service said Storm Eunice, known as Storm Zeynep in Germany, was likely to cause significant disruption and dangerous conditions, with gusts that could exceed 90 miles per hour in highly exposed coastal areas. The Met Office later said a gust of 122mph was recorded on the Isle of Wight, tentatively the strongest on record in England.

British authorities have taken the unusual step of issuing ‘red’ warnings – indicating a danger to life – for parts of south-west England between 7 a.m. and noon and for south-east England and London from 10 a.m. to 3 p.m. A lower level amber warning for gusts up to 80mph covers the whole of England from 5am to 9pm

Eunice is the second named storm to hit Europe in two days, with the first killing at least five people in Germany and Poland. Peter Inness, a meteorologist at the University of Reading in England, attributed the storms to an unusually strong jet stream over the eastern Atlantic Ocean, with winds approaching 200mph at high altitudes.

“A powerful jet stream like this can act as a production line for storms, generating a new storm every day or two,” Inness said. “There have been many occasions in the recent past where two or more devastating storms have passed through the UK and other parts of Europe in the space of a few days.”

Even as Britain braced for the height of the storm, Eunice was already disrupting travel in southern England and Wales with many rail services disrupted and many flights cancelled. A number of tourist attractions in England, including the London Eye, Legoland and Warwick Castle, closed ahead of the storm, as did royal parks. Sections of the roof of the 02 Arena were torn off by the storm.

“I urge all Londoners to stay at home, not to take any risks and not to travel unless absolutely essential,” Mayor Sadiq Khan said.

The UK government is set to hold a meeting of its COBRA emergency committee to discuss the storm. The army is on “high readiness standby” to respond if necessary, Home Secretary Damian Hinds told Sky News.

“Following the impacts of Storm Dudley for many on Wednesday, Storm Eunice will bring damaging gusts in what could be one of the hardest hitting storms to affect southern and central UK for a few years,” said Paul Gundersen, from the Met Office. chief meteorologist. “Red warning zones indicate significant danger to life, as extremely high winds can damage structures and flying debris.”

The storm is expected to hit northern Germany on Friday afternoon and head east overnight. A flood warning was issued for the German North Sea coast on Friday. Meteorologists warned Friday’s storm could cause more damage than the previous weather system, which triggered crashes that killed at least three people, toppled trees and damaged roofs and train tracks.

Germany’s largest rail operator, Deutsche Bahn, is canceling all train connections in the north of the country on Friday due to the storm.

The Netherlands Meteorological Institute issued its highest warning, code red, for coastal regions of the Netherlands and code orange for much of the rest of the country as the storm battered the low-lying nation . The country’s railway company said it would stop all trains nationwide from 2 p.m. (1300 GMT). Airline KLM has canceled dozens of flights at Amsterdam’s Schiphol airport.

On Scheveningen beach in The Hague, authorities built sand walls to protect seaside bars from the storm, even as dozens of surfers braved the weather in search of storm-driven waves.

The Dutch football association has postponed all professional and amateur matches scheduled for Friday.

Storm Eunice has caused increased concern because it has the potential to produce a “prickly jet”, a small area of ​​intense winds that can exceed 100 mph.

An example of such a phenomenon occurred during what is known as the Great Storm of 1987, which killed 18 people and felled 15 million trees across the UK, according to the Met Office.

Liz Bentley, chief executive of the Royal Meteorological Society, described the phenomenon as being similar to a scorpion in the sky.

“It’s often called a sting-jet because it’s like the sting in the tail as the storm moves,” she said. “Other people have almost pictured like a scorpion tail curled up in the cloud…And that’s usually where the strong winds are – right at the tip of that curl of cloud.”

Rail operators across Britain urged passengers to avoid travel on Friday and many services were closed.

British Airways has warned of delays at London’s Heathrow Airport as weather conditions have reduced the rate at which planes are allowed to land.

The government’s highways agency said vehicles with high sides and other “vulnerable” vehicles such as caravans and motorbikes could be knocked over, so bridges and overpasses should be avoided.

Friederike Otto, a climatologist at Imperial College London who is part of World Weather Attribution, which studies the link between extreme weather and global warming, said there was no evidence that climate change was leading to more violent storms in Europe.

But she said damage from those storms had increased because rainfall had become more intense due to human-induced climate change.

“And the second thing is that the sea level has risen. This means that the flooding caused by storms, which also occurs during such storms, is greater and therefore causes greater damage than there is. would be without climate change.

What is it and what does it mean for California? – NBC Los Angeles