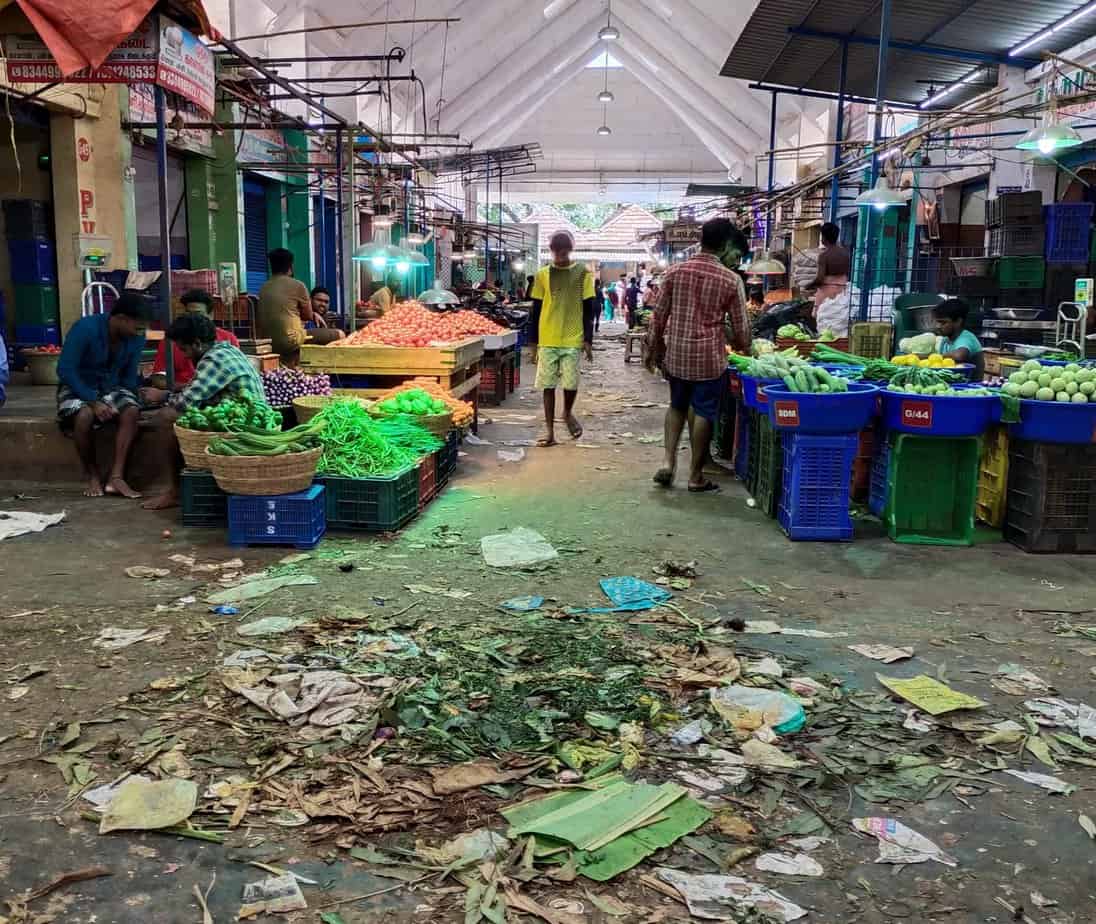 Koyambedu Wholesale Market has been a one stop shop for perishables for many residents and retail traders in the city for almost 25 years now. However, waste management in the market campus remains a Himalayan task despite the changing times.

“We are coming from the OMR road to buy the vegetables and fruits needed for a week. One of the major issues we have witnessed is navigating the market paths. Most of the time, the aisles are filled with fresh vegetable waste and it becomes difficult to find your way around during busy periods. When it rains, it becomes more slippery and older people find it more difficult to walk these paths,” said resident Dr Prakash.

What Prakash noticed was not an isolated case. It is something that every individual, be it the public or traders entering the market, faces on a daily basis.

The purpose of the construction of the Koyambedu Wholesale Market Complex (KWMC) over two decades ago was to decongest the city by the Chennai Metropolitan Development Authority (CMDA). But the market itself is becoming a point of congestion and chaos, especially when it comes to waste management.

The challenges of managing waste, limiting the use of banned single-use plastic bags and removing encroachments remain the same regardless of which party is ruling the state, the public told Citizen Matters addressed.

According to the CMDA website, KWMC, which spans an area of ​​295 acres, has a total of 3,194 stores out of which 2,948 stores have been assigned to merchants.

While the public only sees plant waste dumped on the ground, making it difficult to walk down the aisles, shopkeepers explain why they have no choice but to dump the waste where they do.

Vegetables like cabbage come with leaves when they arrive at Koyambedu market from farmers. Traders must peel these leaves before displaying them for sale. According to a trader, D Jagan, at least 30 kilograms of leaf waste would be generated from a large bag of cabbages. As there is no dedicated place to deposit this type of waste, merchants tend to leave it in front of their stores on the aisles.

Lack of sufficient storage facilities is another factor leading to wastage even over two decades of market operation. Although the market has been operating for more than two decades, there is still only one cold storage unit. It hasn’t been renovated for years.

“The temperature in the appliance is also not regulated according to the nature of the vegetables. In addition, the generator, which is supposed to be an emergency power source for the cold storage unit, remains out of order, which sometimes damages the stored goods and leads to waste,” the traders alleged.

Traders are charged around Rs 20 to Rs 25 per box of goods per month. Usually the goods are stored for a period of time, depending on their nature. While apples could be stored for months, vegetables would only be stored for a day, they added.

While the stores built in the Koyambedu market campus were only for selling goods, traders also started installing storage facilities inside the stores as the cold storage unit does not is not reliable although it remains to work.

On the other hand, small shops (measuring approximately 150 square feet) would not have enough space to store all the goods. In an effort to facilitate the storage facilities of these small stores, godowns were built. However, traders alleged that these godowns (measuring over 2,500 square feet) were being sold to individuals by the CMDA. Godowns now operate like department stores. Finally, these small businesses have no other choice but to keep their stock and their waste on the aisles in the middle of the garbage which is piled up, jeopardizing the hygiene of the goods available.

Fresh waste that is dumped on the trails is usually cleaned up by sanitation workers deployed by private contractors. According to traders, the market campus is cleaned twice a day. However, they alleged that the cleaning was not done properly.

Five months ago, a tender for waste management was launched and awarded to a new contractor. The situation did not improve even after the new contractor took over.

“They clean wide open spaces properly, while narrow lanes are not cleaned properly. Tractors and tricycles are used to collect waste. However, when tractors are used in such small lanes, it damages the concrete payment, causing stagnation of water during rains. Water stagnation leads to mosquito breeding, which in turn becomes a huge health hazard to the public and traders,” said wholesaler H Hussain.

“Loaders who usually walk barefoot get infected easily walking through muddy paths. Similarly, contractors do not clean up areas behind stores where garbage sits piled up for days,” he said. added.

The CMDA charges Rs 1 per square unit of the store as a maintenance fee per month. If traders have no difficulty paying the fee, they seek to put the money collected to good use.

As thousands of people walk in and out of the market daily, it is important that the authorities ensure that waste is collected somewhere outside the campus and then transported accordingly, said SS Muthukumar, chairman of Chennai Koyambedu Market Vegetables Semi-wholesales. Association.

The threat of banned single-use plastic

According to traders, frequent inspections and heavy fines have prevented many traders from using the banned plastic bags. However, they said the product remains in circulation despite numerous government initiatives.

Sources who requested anonymity said the manufacturers have agents with whose help the banned plastic bags are hidden among other bags and are brought inside the market. They added that the government should start penalizing manufacturers before imposing fines on traders.

“The goods started arriving at the market in the evening. Around 8 p.m., the plastic bags would be brought inside the campus. Before 9 p.m., everything would be distributed. Once sales started, officials came for surprise inspections and imposed fines on traders and sometimes sealed stores. Ultimately, it is traders who pay the price for the use of plastic bags, when the government should instead tackle the problem at its root and seal manufacturing units,” the sources added.

Another target of the makers are makeshift traders who have set up retail stores by encroaching on the roads near Koyambedu market and the private bus stop. The public, who only want the minimum amount of goods, prefer to buy from overrun retailers. This circulates the plastic bags from the manufacturers to the customers.

There has been a long-standing demand to eliminate the invaders in Koyambedu. While hundreds of people have set up makeshift shops without any permission, many shops remain vacant inside the market campus. “This not only leads to loss of revenue for the government, but also keeps the cycle of pollution afloat,” commented CP Ramesh, Vice President of Vegetable Semi-Wholesalers Association of Chennai Koyambedu Market, asking government to eliminate encroachments.

According to official CMDA sources, the market is to be revamped at a cost of Rs 20 crore which includes solid waste management as a major focus of the scheme. At present, officials said waste management work is being closely monitored.

Meanwhile, the CMDA has given the green light to a pilot project to turn waste into manure using a new nano-gel technology. NGOs and self-help groups will also be tapped for the same. Officials also added that a study is underway into encroachments in and around the market. Commenting on the circulation of banned single-use plastic, officials said regular inspections were carried out and measures were taken to curb the circulation.

Criticism of Albanese’s foreign trips is nonsense, but Prime Minister finds it’s not a vacation at home either | Hugh Riminton

Sandfield Strengthens IT Security and Automates Monitoring with LogRhythm