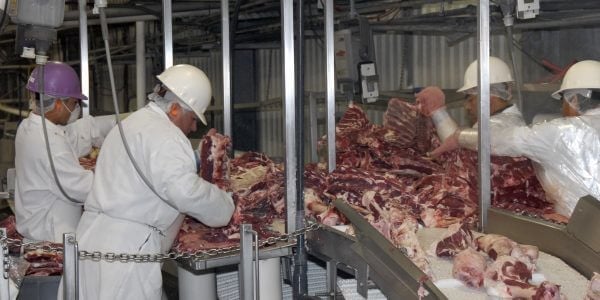 Discussions are ongoing as to whether or not a new beef packing plant would be viable in Saskatchewan. The industry has maintained healthy margins over the past two and a half years, and with Saskatchewan being the literal breeding ground for over a million cows, it’s no wonder the province is in consideration.

The Saskatchewan Stock Growers Association (SSGA) hired Willie Van Solkema, through Kevin Grier Consulting, to look into the viability and feasibility of the project.

A successful packing plant is a combination of many variables, including the size of the proposed plant, but Van Solkema says Saskatchewan beef production could easily support a reasonably sized new facility.

With about a million cows, including 150,000 feeder cattle in Saskatchewan, a 1,000 head a day slaughterhouse could be feasible, Van Solkema says.

He notes that these cattle are largely transported to slaughterhouses in Alberta and therefore would not be new numbers of cattle, they would simply be redirected to the new facility in Saskatchewan rather than shipping them out of Province. The dispersion would create a competitive factor, he says, but one that would ultimately save producers on transportation costs.

On the competition front, it is important to note that when it comes to plant size, the number of cattle available in the province is not the only thing to consider when taking this decision.

Van Solkema explains that even if Saskatchewan could maintain a 1,000 head per day facility, at that size it would be competing with the two main packing facilities and would then also need domestic and international customers. This is opposed to a smaller 150 head per day facility, in which case the plant could market and sell locally, putting less pressure on the sales and marketing funnel.

While they’ve established that Saskatchewan has more than enough cattle to sustain the facility, producers are also having some very real conversations about herd downsizing. Van Solkema says the nature of the industry, from both a packer and producer perspective, is cyclical and it could come full circle again.

“At what point, with lower cattle numbers, does that operating margin change – where ranchers now have leverage and they’re going to get more money for their cattle, and the packer loses ?” asks Van Solkema. The other challenge is that once you sign on the dotted line, it takes you two to two and a half years to build a factory. In those two and a half years, I would say the cycle could change. I even believe that it is planned to change. So timing is also one of those issues.

He says the project needs long-term investors. As for the mills in High River and Brooks, Alberta, those mills have been in operation for over 30 years and there are still 20 or more left. Having an investment of only five to ten years is probably not something that would be beneficial to the factory or the investor, says Van Solkema.

Right now, he says, all things considered, that seems like a viable option, but there are still a lot of things to consider, one of which is making sure the right partner is signing on. Van Solkema theorizes that it is ideally someone who works in the food industry in Canada, but not in the beef sector and who has contacts in international markets.

This will be the next step in the process to see if they can find suitable and viable investors.

What is an SQL injection (SQLi) and how to prevent it?